Once ready, the Nhon – Hanoi Station metro line is expected to serve more than 23,000 passengers per hour from 2021.

The line is planned to have 10 France-manufactured trains with a capacity of 950 passengers each.

The trains are expected to be operated at 35km per hour on average and 80km per hour maximum, the same speed as metros in Paris, Berlin and other Asian cities.

Hanoi Metropolitan Railway Management Board said the train was designed to have a wide door, creating more space for passengers, especially passengers with restricted mobility, to get on and off.

The colour of the trains is inspired by the colour of Vietnamese dragon fruit and yellow rice field that was warmly applauded by the public following a survey in September 2018, the board said.

After the trains are completely assembled, they will undergo testing at the Railway Testing Centre in Valenciennes, France before being sent to Vietnam.

Next, the producer will be required to test the train’s automatic control system and audio-visual equipment during the last six months of 2020 at the construction site of Nhổn – Hanoi Station, the board said.

The board also said it was scheduled that Alstom, the French producer of the 10 trains for the railway line in Hanoi, would send the first train to Vietnam in June 2020, online newspaper Tiền Phong (Vanguard) reported.

Then, three other trains would be dispatched to Vietnam in August, 2020.

Previously, the People’s Committee of Hanoi and France’s Alstom Company signed a memorandum of understanding about the introduction of the first train in the line on October 29.

The project, which kicked off in September 2010, was scheduled to be completed in September 2017 but has had problems with land clearance, so the city People’s Committee extended the project deadline to 2022.

The 8.5km elevated section is planned to be finished in April 2021 and the remaining 4km underground line will be opened in December 2022.

The project's investment of about VND30.1 trillion (US$1.29 billion) comes from official development assistance of the French Development Agency and loans from the French Government.

The Hanoi government is also considering building a number of monorail lines to better exploit the entire urban railway system in the capital city. 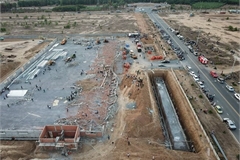