Vietnam reported no new COVID-19 cases in the past 12 hours to 6am on April 18, keeping the national count at 2,781, according to the Ministry of Health. 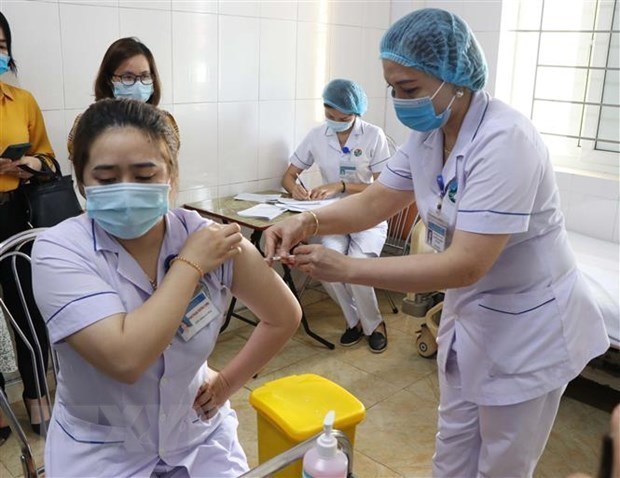 The ministry’s Medical Service Administration reported that as many as 2,475 have been given the all-clear from the coronavirus SARS-CoV-2 so far.

Among active patients undergoing treatment at medical establishments across the country, 11 tested negative for the virus once, 16 twice and 18 thrice.

A total of 40,150 people who had close contact with COVID-19 patients or entered Vietnam from pandemic-hit regions are being quarantined nationwide, including 531 in hospitals, 24,361 at concentrated facilities and 15,258 at their residences.

According to the National Expanded Immunisation Programme, an additional 1,423 people received COVID-19 vaccine shots on April 17, bringing the total number of vaccinated people to 67,789.

According to the ministry, Minister of Health Nguyen Thanh Long is due to lead a working group to examine pandemic prevention and control, and the vaccination work in southern Kien Giang province on April 18.

Earlier on April 17, the ministry decided to set up five working groups led by the minister and four deputy ministers to supervise the implementation of regulations on immigration, medical quarantine, and COVID-19prevention and control, as well as vaccination work in certain localities in the south-western region.

The ministry has issued a decision on adjusting the allocation of 110,000 doses of AstraZeneca COVID-19 vaccine from the COVAX Facility for the second phase of the vaccination drive.

Accordingly, of the 80,000 doses allocated to the military forces, 35,000 doses will be distributed to the military forces, 34,350 doses tocentres of disease control (CDC) in 44 provinces and cities nationwide, and the remaining doses to the five provinces of An Giang, Tay Ninh, Kien Giang, Dong Thap and Long An that have already received the vaccine.

Also under the decision, the ministry adjusted 30,000 doses allocated to police forces to CDCs of 62 provinces and cities nationwide.

On April 1, Vietnam received 811,200 doses of AstraZeneca vaccine supplied by the COVAX Facility. On April 7, the Ministry of Health announced the allocation of the vaccine for the second phase, and so far the vaccine has reached 49 of the 63 provinces and cities.

Vietnam to accept three groups of people with vaccine passport

The Ministry of Health (MoH) suggested that Vietnam first accept three groups of people with proof of vaccination against the SARS-CoV-2 virus.