At present, there are currently no reported cases of acute pneumonia caused by a novel coronavirus (nCoV) in the north of Vietnam.

Amid the context of increasingly complicated developments of acute pneumonia caused by nCoV, the Ministry of Health underwent an urgent meeting in Hanoi on January 24 in a bid to announce updates about the disease under the chair of Deputy Prime Minister Vu Duc Dam. 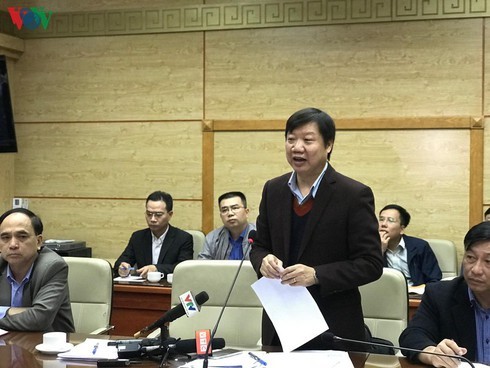 Assoc. Prof. Dr. Tran Nhu Duong, Deputy Director of the National Institute of Hygiene and Epidemiology speaks at the event.

The Ministry of Health and relevant units made a statement confirming that amid the possibility of the disease spreading nationally, the Ministry of Health has directed the country’s entire health system to strictly monitor border gates and health facilities. Moreover, there have been efforts made to encourage communities to be quick to detect, isolate, and control any suspected cases in an attempt to avoid the epidemic spreading further.

Assoc. Prof. Dr. Tran Nhu Duong, Deputy Director of the National Institute of Hygiene and Epidemiology, said there have been no cases of the nCoV infection being found in the north of Vietnam, with the only patients suspected of having caught the virus being placed into isolation and being strictly monitored.

The National Institute of Hygiene and Epidemiology has been working in close co-ordination with hospitals in an attempt to keep a close watch on any suspected cases. This includes patients being isolated, including one at the Central Hospital for Tropical Diseases and another at the National Hospital of Pediatrics.

To date, the Vietnamese and Chinese patients placed in isolation have been identified as having other diseases, including influenza, according to Assoc.Prof. Dr. Duong.

The National Institute of Hygiene and Epidemiology have stated aside from the patients who have been identified as having other diseases, the remaining patients are strictly monitored and isolated in hospital.

Elsewhere, two Chinese citizens have been quarantined at the Ho Chi Minh City-based Cho Ray Hospital after testing positive for nCoV. They contracted the virus in the outbreak of acute pneumonia in Wuhan, China.

These represent the first confirmed cases of individuals in Vietnam being infected with the virus since the disease spread outside of Wuhan in December, 2019.