Thien An Orphanage is home to hundreds of abandoned children in Gia Lai Province. 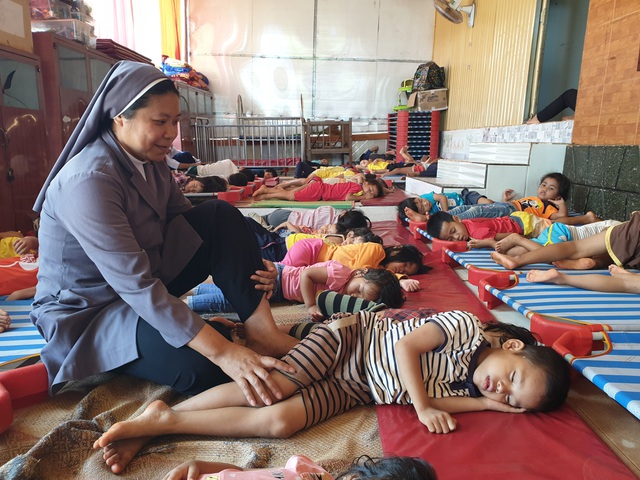 Thien An Orphanage is in Chu A Commune, Pleiku City. It was established by nun Nguyen Thi Kim Chi in 2010.

Chi has a disadvantaged background and was raised by the love of the nuns in Tho Thanh Parish, Buon Me Thuot City. She later learned preschool teacher training and agriculture before taking a training course to become a nun. In 2007, she went to work at the Monastery of St. Paul.

During this the time she had taught many ethnic children how to plant crops and raise cattle to escape poverty. Many children lacked parental care and were malnourished.

"Most of them walked barefooted. They followed their parents to the fields and took care of themselves. They didn't have enough food, clothes, didn't know how to read and write," Chi said.

That's when she decided to set up Thien An Orphanage. A friend of her introduced her to the 1,000 square metre plot of land and she quickly gained permission from the local authorities and donations to build the orphanage. As of now, it is home to 180 children from different backgrounds and many lonely women with unwanted pregnancies. 40 employees at the orphanage also include lonely old people.

"This orphanage is like a book and each child has a story of their own. Some of them are very poor and had nearly dropped out of school. Some are really ill and others are abandoned. Most of them are ethnic people," Chi said. "This house will protect and take care of them when they are still too young."

Le Thi Hoai Thu said, "I was brought to the orphanage by sister Chi when I was very small. I was also named by her. After 9th grade, I decided to take a vocational course and she taught me how to make bread. Since then, I took on the task of making bread for everyone at the orphanage."

Nhip from Jrai ethnic group said his parents sent him to the orphanage at the age of 13 because of poverty. Thanks to the love he received, he was able to graduate from preschool pedagogy and returned to work at the orphanage.

"I was raised from their love and I want to repay it somehow by helping taking care of the children," Nhip said.

Unemployed and disabled people were also given a chance to work at the orphanage.

Y Hrul from Xe Dang ethnic group said, "I'm a single mother to three children. I don't have any cultivated land so it's hard. I have been given lots of help in the past two years at the orphanage and my children can go to school too. I'm just really grateful."

"The hardest thing is to understand children's strong and weak points. Some children aren't qualified for vocational school so we help them find an apprentice spot at repair shops and bakery," Chi said. Dtinews

Some 30.8 million employees aged over 15 in Vietnam had been left reeling from the coronavirus pandemic by June, with roughly eight million being laid off or having their working hours reduced and 17.6 million given salary cuts.

No new cases of COVID-19 were reported on July 4, leaving the total number of confirmed cases at 355, according to the national steering committee for COVID-19 prevention and control.

Vietnam’s most critically ill COVID-19 patient has recovered well and is now in good enough health to be flown back home to the UK on July 12 as per the request of the UK Embassy in Vietnam.

Villas and architectural works built before 1954 in Hanoi will not be licensed for renovation and repair in the near future.