The police have begymun imposing fines online on traffic law violators following the launch by the Ministry of Public Security of the national population database system. However, this has not been done on a large scale. 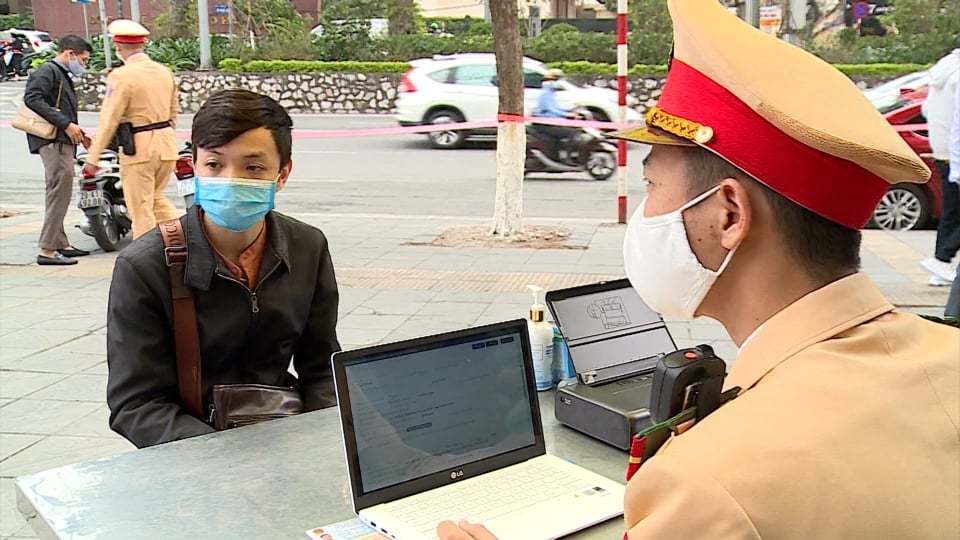 With the system, traffic policemen just need to enter violators’ ID numbers into the system to see names, dates of birth and current residential addresses so they can make decisions on sanctions.

Violators can pay fines via a service system from the link guiding payments. The police will send back documents and complete the process of dealing with violations after they check the system and find if the violators have paid the fines.

However, this has only been applied to the violators who have a chip in their citizen identity cards and bank accounts. These kind are of violations are subject to on-spot fine payment, under decision of the policemen on the site. The fines for the violations are below VND250,000 and policemen won’t seize drivers’ motorbikes and documents.

Only when all citizens have chip mounted citizen identity cards will the electronic signature system become operational. Then all violations will be dealt with online.

As for violations subject to heavier fines, to be determined by directors of provincial police departments or province chairs, this still cannot be applied because high-ranking officials are not always available to sign the decisions on sanctioning. And digital signatures are not accepted in these cases in accordance with the law on administrative violations.

If people commit serious violations and have their driving licenses revoked, they have five days to explain to appropriate agencies under the current laws.

Nguyen Van Thach from the Ministry of Transport said the online fining via citizen identity cards in connection with the national service portal is very convenient, which allows both violators and police to follow procedures quickly. Violators don’t have to travel a lot to fulfill the payment procedure.

Colonel Do Thanh Binh, deputy head of the Traffic Police Department, said that previously, when dealing with traffic violations, policemen had to record information on paper, and decisions on sanctions were released seven days later. Violators had to go to agencies to pay the fine directly.

Now they can pay the fine immediately and do not have to go to the agencies to pay the fine.

Paperless sanctions will also help mitigate wrongdoings, because policemen will not be able to ignore violations.

More national highways were open to traffic in an effort to reduce traffic congestions in the Mekong Delta.

As she wears both a white blouse and military blue uniform, PhD Dinh Thi Thu Hang is always aware of a military medical soldier’s responsibilities.

The HCM City Centre for Disease Control (HCDC) said that returnees from localities with COVID-19 patients in Hai Phong City and Binh Duong Province must quarantine at home for 14 days.

Flocks of passengers headed towards HCM City-based Tan Son Nhat international airport to return home or travel in light of the sharp drop in prices for air tickets.

One imported case of COVID-19 was detected in the past 12 hours to 6pm March 28, who was put into quarantine after entry, according to the Health Ministry.

While waiting for approval of special mechanisms for the development, the municipal authorities will hand over the highest authority to Thu Duc City to solve its issues and problems promptly