Quang Ngai to evacuate over 12,000 people to avoid flooding

Quang Ngai is preparing to evacuate over 12,000 residents to avoid flooding in the downstream of the Tra Khuc, Ve and Tra Cau rivers. 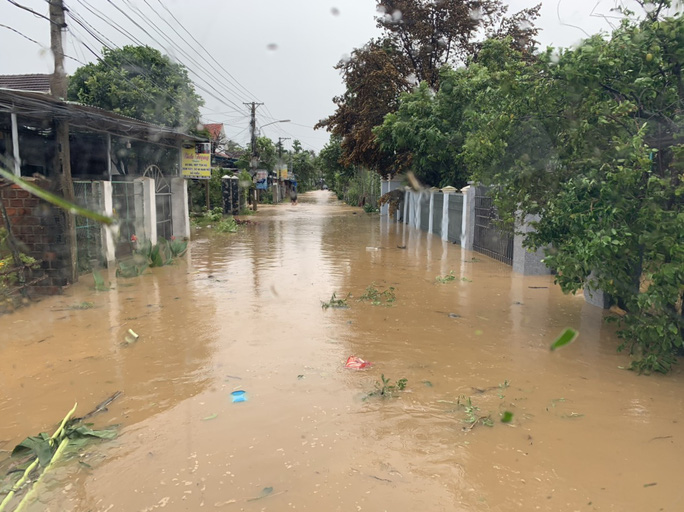 Floodwater rose in the central region

At 7 pm on October 28, Dinh Xuan Sam, chairman of Nghia Hanh District People's Committee said the whole district has been isolated. "The floodwater rose very quickly. Many houses still haven't been repaired. Some houses are under 1.5-2 metres of water. We are doing our best to carry out search and rescue missions," he said.

According to the plan, all residents in low-lying areas like Hanh Dung, Hanh Nhan and Hanh Duc communes in Nghia Hanh District will be evacuated on October 29. Everyone was worried that they wouldn't have anywhere to stay. Many houses were unroofed and haven't been repaired as the floodwater rose.

A total of 12,000 people in Mo Duc, Nghia Hanh and Duc Pho districts will be evacuated to avoid flooding.

Meanwhile, 13 workers are stuck on a container house amid Tra Khuc River. Because of strong currents, Quang Ngai authorities had to ask reservoirs to temporarily stop discharging water so that they could carry out the rescue mission.

The authorities must also send employees to regulate traffic so drivers can avoid flooded areas.

More than 1,200 cars and trucks have stuck at the Hai Van Tunnel due to road blockages during Storm Molave.

As of 6 pm on October 28, the line of vehicles on National Highway 1 in Phu Loc District, Thua Thien-Hue, was over 10km long.

From 12.30 am to 6.30 pm on October 28, the Hai Van Tunnel that connects Thua Thien-Hue and Danang was gradually closed both ways to prevent drivers from going near Storm Molave.

The police in Phu Loc District and Thua Thien-Hue Province and local authorities have provided 5,000 meals and 1,000 water bottles to thousands of drivers that got stuck there.

The authorities are still monitoring the situation and evaluate traffic safety issues in complicated weather conditions.

Some central provinces are forecasted to see heavy downpours from now until October 31.

According to the National Centre for Hydro-Meteorological Forecasting, a cold spell is hitting the centre following the Storm Molave, bringing heavy rains to these regions, especially in provinces from Nghe An to Quang Binh.

"From 7pm on October 28 to 1am on October 29, heavy rains were reported in many provinces in the central region with some areas in Ha Tinh, Quang Binh recording a rainfall of up to 108 mm," the centre reported.

"Rains will continue until October 31 from Nghe An to Quang Binh, with total rainfall of between 200-400mm." Nguoilaodong/Dtinews