As many as 560 volunteers, aged from 18 to 65, will participate in the second phase, according to Nguyen Ngo Quang, Deputy Director of the Department of Science, Technology and Training under the Ministry of Health.

The testing will be carried out at the Vietnam Military Medical University in Hanoi and in the Mekong Delta province of Long An by the HCM City-based Pasteur Institute.

Most of the volunteers of the first phase that begun on December 17, 2020 are in stable conditions after vaccination. Only few reported pain at the injection spot and fever that disappeared after one to two days.

Developed by the Nanogen Pharmaceutical Biotechnology JSC, Nano Covax is the first Vietnam-made COVID-19 vaccine to enter human trials, with another two from other manufacturers to follow in February and March.

Vietnam is one of the 40 countries that have conducted human trials of a COVID-19 vaccine. 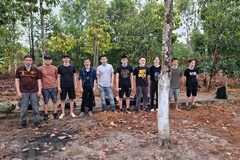