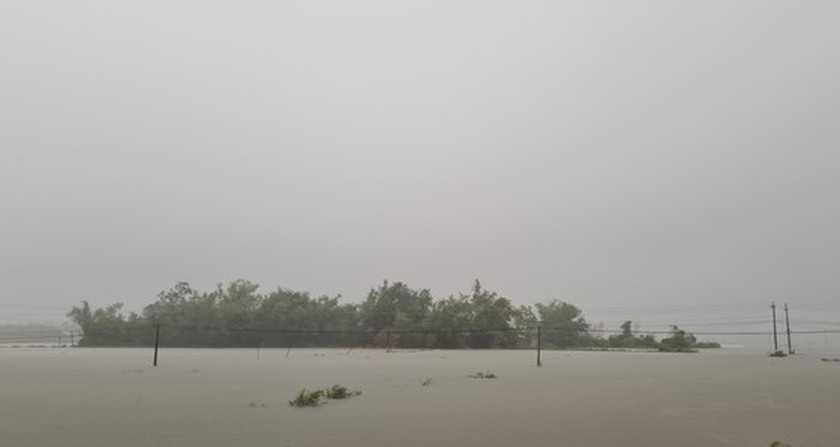 Amid the urgent situation, the functional forces yesterday reinforced low-lying and high-risk areas at the Covid-19 Field Hospital in Lien Chieu District and evacuated patients to Da Nang Lung Hospital for treatment. The Department of Health of Da Nang City prepared 44 ambulances to transport the patients.

Covid-19 checking points have ceased their operation to avoid the typhoon.

In Quang Nam Province, the local authorities mobilized its forces and people in coastal districts of Dien Ban, Thang Binh, Nui Thanh and Hoi An City to promptly reinforce houses, the anchoring place for vessels and built storm drains. Since this morning, vast areas in the province have laid under floodwater.

Quang Nam Province also urged its localities to evacuate thousands of people living in landslide-prone areas to safe places in advance September 11, and recommended residents to reserve foodstuffs and essential goods for a week.

Meantime, Thua Thien- Hue Province prepared the evacuation plan for 67,674 people. The Provincial Department of Industry and Trade also planned to reserve 100 tons of instant noodles and 100 tons of rice for the worse situation ahead.

The bad weather condition forced A Luoi Hydropower Plant to discharge water up to 2,000 cubic meters per second, A Lin B1 Hydropower Plant to release water at 800 cubic meters per second from last night, ensuring the safety of works under construction and the downstream areas. The thundery downpours have blown up 29 house roofs in Phong Dien and Quang Dien districts.

Vietnam to evacuate more than 330,000 residents as typhoon Conson nears