At the end of 2019, Fabrice, 49, came to Vietnam where his mother and grandmother were born.

After visiting many places in Vietnam, he decided to return to his country, but faced the Covid-19 outbreak, so he has been stuck in the country since then. 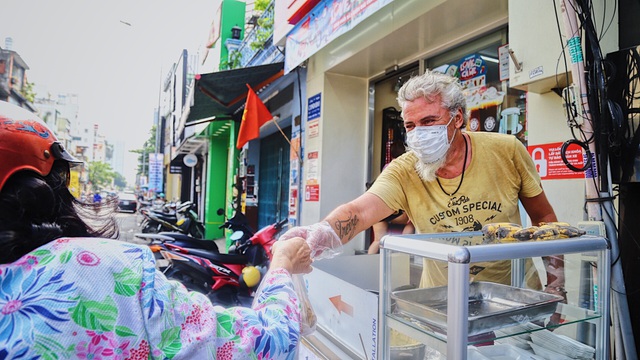 Fabrice is working as a vendor in HCM City to earn a living.

It has cost him around VND7 million (USD304.34) per month to live in Vietnam. In November 2020 when his money mostly ran out, he worried and called for his relatives for help.

A friend of his advised him to use his remaining money to buy a trolley for selling fried bananas and pineapples on streets. He then decided to do the job and bought a trolley, a stove and some necessary materials such as bananas and butter.

He chooses the junction at Tran Dinh Xu in District 1 to place his stall. Each set of fried banana and pineapples is sold at VND10,000 (USD0.43). 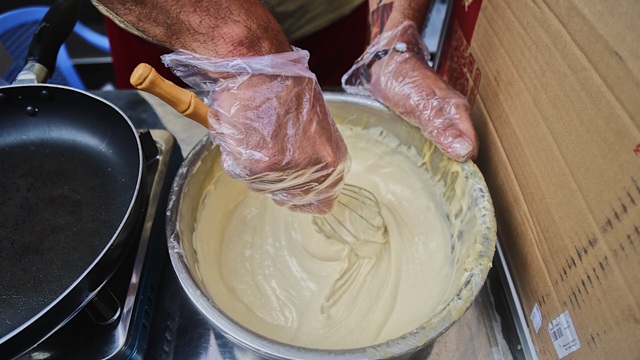 Each set of fried banana and pineapples is sold at VND10,000.

Every day, he has to get up at 4 am to prepare materials and opens the service around an hour and a half later. He closes the stall when he has sold out.

Nguyen Thanh Phong, 23, said that he likes Fabrice’s dried bananas which are quite cheap and delicious. Fabrice uses butter, instead of cooking oil, so that his products are less greasy. He also often gives the cakes to the poor and the disabled free of charge.

He makes the products in front of the customers so customers can witness how they are made. 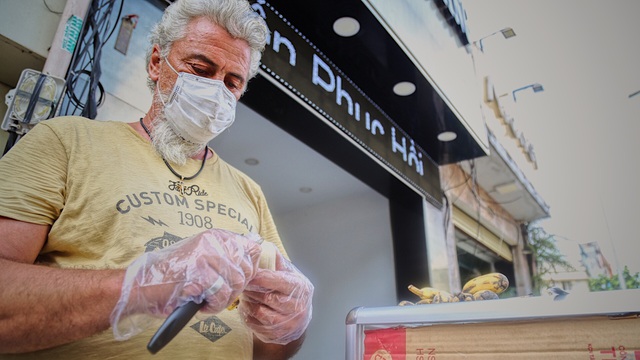 The French man is also friendly to other people.

“The language barrier is among difficulties for me to stay in Vietnam. I can only speak French and just a few English words. So, in many cases, I can’t understand what people say,” he said.

Fabrice said he isn’t unhappy at being stuck in Vietnam amid the on-going Covid-19 pandemic. Dtinews

Foreigners who choose Vietnam as their second home

The national tally of COVID-19 infections rose to 10,999 after 118 more locally-transmitted cases were confirmed in the past six hours to 12pm on June 15, according to the Ministry of Health (MoH).

Relocating universities, hospitals, and polluted production facilities to reduce population pressure on the central areas of Hanoi is an important goal of the six residential planning projects in four core inner-city districts.

The Ministry of Health has decided to establish a standing division for COVID-19 prevention and control in Ho Chi Minh City, which is headed by its Deputy Minister Nguyen Truong Son.

Vietnam reported 71 more COVID-19 infections, including one imported case, in the last 12 hours to 6am on June 15, according to the Ministry of Health.

Chairman of HCM City People's Committee Nguyen Thanh Long on Monday agreed to prolong city-wide social distancing in line with the Government's Directive No 15 until the end of June, amid developments of coronavirus outbreaks in the city.

Many universities in HCM City have changed enrollment plans for the upcoming academic year because of the ongoing COVID-19 outbreak.

The national COVID-19 vaccine fund has received more than 4.85 trillion VND (211.35 million USD) worth of donations from 291,818 organisations and individuals as of 5pm on June 13, according to the fund's management board.

The Ministry of Health confirmed 91 new locally-transmitted and one imported COVID-19 cases in the past 12 hours to 6am on June 14, including 73 detected in quarantined or locked down areas.

The northern province of Bac Ninh eased social distancing measures in several areas, starting from 0am on June 13.

Vietnam has confirmed an additional 103 locally transmitted coronavirus cases in five localities during the past six hours, raising its daily count to 297, according to the Ministry of Health (MoH).

More than 93,000 students throughout Hanoi took part in the 10th grade entrance exam for the upcoming school year on June 12.

The municipal Department of Health decided to impose a temporary blockade on the HCMC Hospital for Tropical Diseases in the evening of June 12 after some healthcare workers in the hospital tested positive for Covid-19.