A male student was recently asked to engage in self-criticism before the entire school because he defamed BTS, the South Korean music band.

This punishment has caused a controversy among parents of students.

The student, an eighth grader at the Ngo Quyen Secondary School in Tan Binh district, HCM City last June created a fanpage called "Anti BTS in Vietnam" and posted articles and photos of members of the boy band, using foul language to criticize them, according to the school’s board of management. 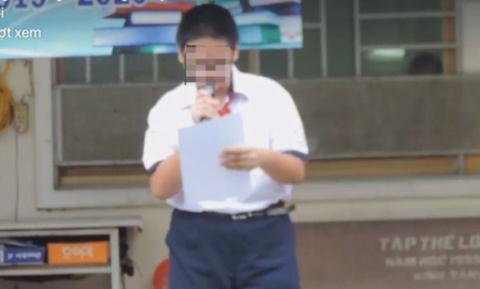 BTS is a highly popular South Korean boy band and has many Vietnamese fans.

VnExpress quoted Nguyen Ngoc Thu, vice principal of the school, as saying that the articles using "inappropriate language beyond the thinking of a secondary school student" outraged fans of the music band, and that the boy’s behavior violated ethics and school rules as well as the law.

They boy received a four-day suspension from classes from November 6 to November 9. During the suspension, he had to go to school for community service.

However, the school’s headmaster punished the student and posted the images on internet. The punishment has been described as ‘anti-education behavior’.

Dr of Psychology Nguyen Kim Quy, a lecturer at the Hanoi 1 University of Education, on November 8 commented that the school’s behavior is just a repeat of the wrong behavior conducted by the male student.

“The school’s management board made a mistake posting the clip on punishing students on internet. The student is at the age of high sensitivity and will easily get hurt,” he said.

“If the school cannot behave in a clever manner, this may lead to drastic opposition by the student,” he warned.

According to Quy, in this case, the school and teachers should have asked him for an apology to the boy band instead of forcing him to self-criticise to appease the anger of the fans.

A parent in Hanoi, on an education forum, criticized the decision by the school’s management board to punish the student, commenting that the behavior humiliated the student in front of the whole school and the online community. The school thought this would work, but in fact, was ‘anti-education behavior’.

The parent also pointed out that by posting the clip on the internet, the school ‘violated the law on children’s rights’.

“The adult behavior was wrong and they were no better than an eighth grader,” she said. “The student offended the boy band and then the school offended the student."

In 2018, Vietnamese student Tommy Nguyen decided to study abroad in a prestigious school in the UK.