They said two months to read, digest and evaluate a total of 32 books before picking the best ones to use was not long enough.

Nguyen Phuong Lan, a teacher at a primary school in Hanoi’s Hai Ba Trung District told the Kinh tế&Đô thị (Economics & Urban Affairs) newspaper that she and her colleagues were yet to receive any books so far to begin the comparison process, while the February deadline set by the Ministry of Education and Training for the final pick was fast approaching.

“If we can’t read and compare (the books) carefully to choose the most appropriate ones, both the teachers and students will struggle and we will not be able to teach as well as we should be,” she said.

The confusion started soon after the education ministry announced last month its final list of five sets of textbooks for the first-grade in the next school year of 2020-21.

In an unprecedented move to grant more autonomy to schools in deciding their own textbooks and curriculum, the ministry asked the teachers to check out all sets of books and submit their picks to the ministry on February 29 at the latest.

They can only vote once and for all and any attempts to revote are not allowed.

Nguyen Van Cung, principal of the Luong The Vinh primary school in Thu Duc District, HCM City told the online newspaper Zing the school was yet to receive any draft textbooks and still awaiting further guidance from the local Department of Education and Training regarding the book selection process.

He, however, doubted if the teachers could really pick out the best books within such a short time frame as they would not be able to hold trial class to test the new textbooks.

“Without real-life teaching, the votes will be highly subjective,” he said.

Authors of the new textbooks had already held trial classes before the books were approved by the ministry and delivered to the hands of the teachers, he said.

“But it is all good if the teachers can find time to hold the trial classes themselves. If they can’t, it isn’t of dire necessity anyway,” Thanh said.

He explained that the new textbooks thoroughly changed the approach methods and the teachers would be able to quickly realise the key messages of the books to deliver to their students regardless of whether they ran trial classes or not.

Thanh also said teachers didn’t have to read the whole 32 books but only their structures to determine which books would best fit their schools and students.

“For example, each teaching session for the first-graders will have pictures and writings. Based on them, the teachers will visualise each textbook’s way of thinking and its problem-solution approach and decide which to select,” he added. — VNS

Out of the US$77 million borrowed from the WB for the project ‘New General Education Curriculum’ in Vietnam, $16 million is allocated for the Ministry of Education and Training to write textbooks. 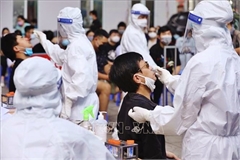