Traffic police have dealt with thousands of violations in HCM City three days after launching a national traffic inspection.

A total of 2,057 violations have been reported

Lieutenant Colonel Nguyen Van Binh from the Road-Railway Traffic Police Division in HCM City said from July 15 to 17, they had inspected 3,172 vehicles including 131 passenger buses, 115 trucks and 2,926 motorbikes. A total of 2,057 violations have been reported and 1,903 of which involved motorbikes.

"There were 306 speeding violations, 261 incidents of people driving the wrong direction, and 125 violations about helmets. Those are three leading violations in the inspection and the main causes for deadly accidents in the past," he said. 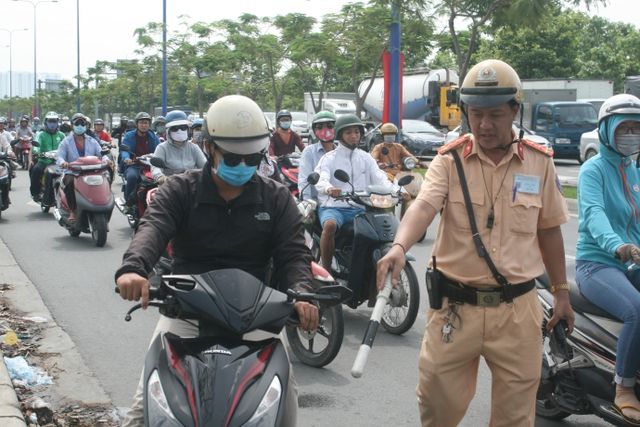 Police pulled over a driver

Statistics from Saigon River Tunnel Management Centre show that in 2018, 24 people died due to traffic accidents along Vo Van Kiet Avenue. The majority of the case involved speeding motorbike drivers.

The traffic police in Cat Lai, Ben Thanh, and An Lac also often carry out speed and breath alcohol tests.

Traffic police nation-wide will intensify checks on vehicles between July 15 to August 14 as part of efforts to reduce traffic accidents. Dtinews