All of us can recall vividly when our gag reflex kicks in as a doctor’s tongue depressor probes a bit too far in our mouth, nature’s clever way of ejecting undesirable objects.

But for an unfortunate 19-year-old girl from Hanoi, the inborn protective response somehow failed to trigger – or it did, just not sufficiently – when she swallowed an entire toothbrush.

The girl claimed she was simply brushing her teeth, but “joked around and laughed too hard."

Hanoi Medical University Hospital, who received the emergency case, said the endoscopic removal was successful in taking out the toothbrush.

Many have expressed incredulity over how such an unwieldy object could go through the narrow throat without much resistance from the body.

Many similar accidents have been reported worldwide but it seems that each time it still manages to puzzle doctors and draw public attention.

Earlier in September, doctors from the northern province of Thai Nguyen said they removed an 18cm-long toothbrush from the stomach of a male patient, the outer layer of which already showed signs of being dissolved by the acidic environment during its two-week stay there.

However, did have an excuse.

The 40-year-old patient was reportedly not of sound mind and in treatment at Thai Nguyen Mental Hospital, so he didn't have the slightest idea that he had swallowed the toothbrush and only complained of a full stomach.— VNS

Hanoi University of Science and Technology (HUST) is studying a system to support the diagnosis of liver cancer using AI to analyse ultrasound images and interpret gene data.

A facility providing Pre-Exposure Prophylaxis – PrEP for HIV prevention was inaugurated at the Hanoi Medical University Hospital at No.1 Ton That Tung Street, Hanoi, on May 22. 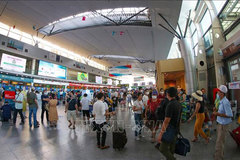