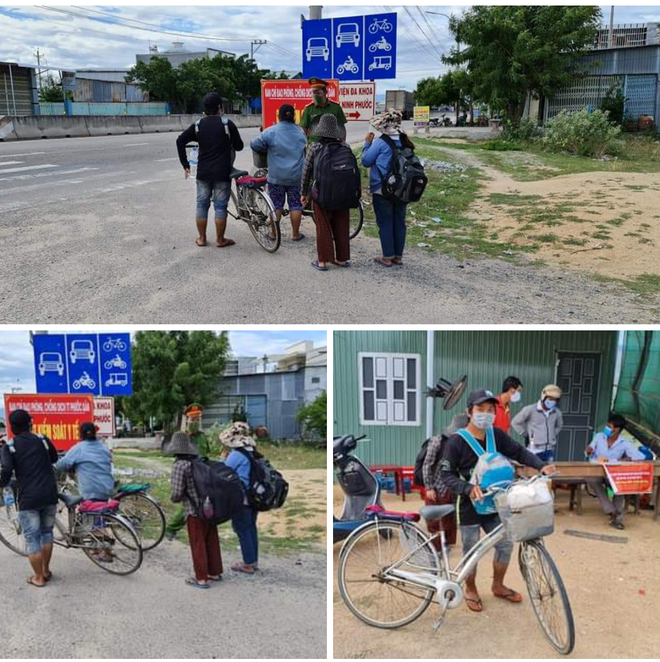 Nguyen Thi Huong and her three children arrive at a checkpoint in Ninh Thuan Province on July 19 after cycling for 10 days from Dong Nai Province.

The woman and her three children all looked very tired when coming to a Covid-19 checkpoint in Ninh Thuan Province on two bikes for health declarations on July 19.

Officers at the checkpoint asked to know that they had cycled from Dong Nai Province and were heading home in Nghe An Province after losing their jobs and running out of money.

The woman, Nguyen Thi Huong, 50, said that she and her three children aged 30, 28 and 12 left home to work for a company in Dong Nai Province but have been unemployed for four months due to the Covid-19 pandemic.

"We have run out of money and can’t pay our rent," she said. "We decided to return home, which is some 1,300 kilometres away by two bikes. We left Dong Nai at 7 am on July 9 and had cycled for 10 days before reaching Ninh Thuan Province."

An officer at the checkpoint, Nguyen Hai Ly, said that after hearing about their situation, he and some other people here gave them VND1 million (USD44) and some food and drinks. Local police also gave them VND2 million (USD88) so that they could buy train tickets.

Ly also shared their story on a website of Ninh Phuoc District Police and many local people have come to give financial support to the woman and her children.

Vice chairman of Nghe An Province's Nghi Loc District People's Committee, Tran Thi Anh Tuyet has confirmed that the four people are residents in her district.

“It is expected that they will arrive in Nghe An Province by train on July 22 and we will arrange transportation and quarantine facilities for them at their commune," Tuyet said.