As the most important festival in Vietnamese culture, Tet (Lunar) New Year retains many traditions that have been passed down for generations, one of which is the rituals performed on Kitchen Gods’ Day.

According to legend, on the 23rd day of the last month of the lunar new year, the Land Genie and the Kitchen Gods ride carp to Heaven to deliver an annual report on household activities.

This year, Kitchen Gods’ Day falls on January 17. On that day, Vietnamese people normally clean their houses and prepare a tray of traditional offerings as a farewell to the Land Genie and the Kitchen Gods before they depart to Heaven.

The ceremony varies in each region. However, all of them show the households’ respect for the Gods.

Vietnamese people in the north normally hold the ceremony early, preparing a tray of offerings from the 20-23 days of the last lunar month.

Not many people conduct ceremonies after that because they believe the Kitchen Gods have already gone to Heaven.

The difference between the ritual in the north and in other regions is the majority of families offer carp as offerings. Depending on each province and family, the carp can be real or made of paper. While live carp are placed on a tray and set free after the ceremony, the paper carp are burnt to help the Gods travel to Heaven.

The tray of offerings is not complete without paper clothing for the Gods, which is also burnt after the ceremony. Other offerings are mainly traditional food like steamed sticky rice, boiled chicken, Vietnamese pork sausages, spring rolls and dried bamboo shoot soup.

The ceremony to worship the Land Genie and the Kitchen Gods in the central region is considered the most sophisticated in the country.

Instead of paper clothing that includes hats, robes and boots intended for the genies on their trip, people in central provinces offer a paper horse with a saddle, votive papers and many other items to the Gods.

The first thing they do is remove old incense sticks from the burners and clean the altar. After the ceremony has finished, families carry three terracotta statuettes of the Kitchen Gods to shrines in their villages or place them under ancient trees.

After bidding farewell to the old statues, they place new ones on their altars to welcome the new year.

People in the central province of Thua Thien – Hue also erect a nêu pole in front of their house or in yards of communal houses on the morning of Kitchen Gods’ Day to scare off evil, signal the arrival of the new year and pray for favourable weather and bumper crops.

The ceremony in the south usually takes place at night, from 8-11pm.

According to their beliefs, the ceremony should be conducted at the end of the day after families have finished their dinners. At that time they do not use the kitchen to cook and therefore do not disturb the Kitchen Gods.

Besides traditional food like spring rolls, pork sausages and hưng cakes, their offerings include stuffed sticky rice balls, peanut and black sesame candy bars and votive papers printed with flying storks and running horses. Instead of paper carp, southern families burn these votive papers with the hope of sending the Kitchen Gods back to Heaven quickly. — VNS

A range of carp-shaped snacks including sticky rice and jelly are proving to be popular food items ahead of the annual Kitchen Gods Day, which falls on the 23rd day of the final month of the Lunar New Year, known locally as Tet. 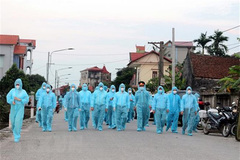