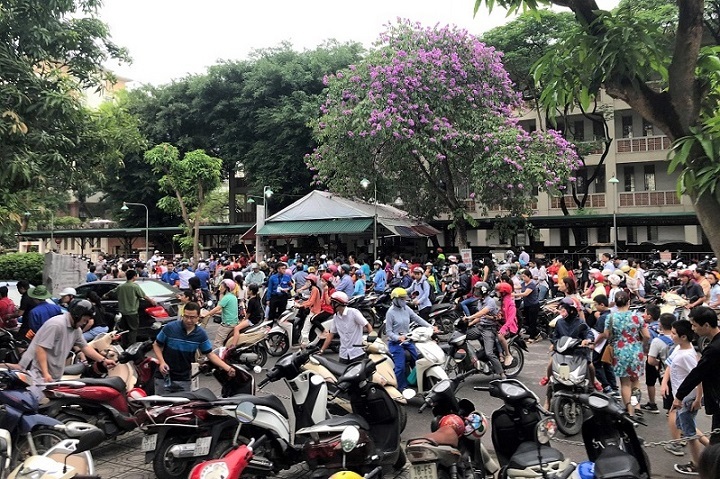 The Middle School of the University of Language and International Study (UMS), Cau Giay Secondary School, Doan Thi Diem Secondary School and Archimedes Academy are among the most famous secondary schools in Hanoi for their high 30 to 1 successful application ratio. In HCM City, Tran Dai Nghia is the only secondary school allowed to hold admission test to the sixth grade with an eight to one competition for places.

Hong, a parent from Hanoi, said her 5th-grade son has been going to cram school for maths, literature and English since third grade. She hoped that he will get into one of the best secondary school in Hanoi and then aims for Hanoi-Amsterdam High School.

"I spend about VND7m (USD302) to VND8m on cram schools alone, not including other expenses and efforts and time spent picking him up," Hong said.

Mai Quynh, a parent in HCM City, said her child took maths, literature and English extra classes since third grade. Quynh said if she doesn't make her child study early, he may not be able to get into famous schools and his survey exam is in English with questions to almost all subjects. Quynh also searches for useful tests on the internet for her child.

Meanwhile, Tien Hieu said he hired an English tutor for his child four times a week at the cost of VND300,000 each shift then registered for his child to study at cram school as well. Besides knowledge about maths, history, literature and geography, a child must also know about the current news and events and experience IQ and EQ tests.

"The salary of one parent is just enough to pay for his tuition and fees," he said.

Thanh Huong from Hanoi's Ha Dong District said she thought that making her daughter take cram school for 6th-grade entrance exam since before Tet Holiday was already early, but she was shocked to find out that many children had studied much earlier. She made her child study maths and English at two different places.

"Travelling back and forth with her a total 20km or waiting for her one to two hours on the streets is normal," she said.

There's no time left for her daughter to do anything else as her classes, extra classes, cram school and homework filled the whole week. According to Huong, other children are also studying at cram schools and may even be studying more than her daughter. Dtinews/Vietnamnet

Some educators have warned that the sharp rise in tuition set by state-owned schools will deprive poor but good students of opportunities to access higher education.