Vietnamese students participating in the International Science Competition 2019 (ISC) in Bogor, Indonesia, have enjoyed success in the event, with all of the delegation’s members bringing home prizes. 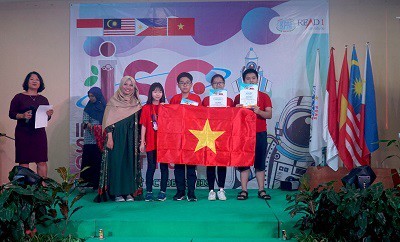 According to information released by the Ministry of Education of Training, the Vietnamese team was made up of 39 students and six teachers from both Trung Vuong and Ngo Si Lien secondary schools in Hoan Kiem district.

All of the 39 Vietnamese students participating in the competition will take home a medal, including four golds, 10 silvers, and 14 bronze, along with 11 encouragement prizes.

Furthermore, four students from Trung Vuong Secondary School also won a Gold Trophy thanks to their outstanding performance in the robot segment.

This year’s ISC event consisted of two contests, one comprising of individuals and the other as a team.

During the individual contest, all competitors had to present in English. This segment involved competitors answering 30 multiple-choice questions, along with eight open questions.

During the team contest, students from each team wrote codes for a robot with the aim of overcoming various obstacles. VOV

HCM City is planning to pilot COVID-19 green cards in districts 7, Can Gio and Cu Chi, places where the pandemic has basically been controlled.

As Vietnam struggles to cope with the fourth outbreak of the COVID-19 pandemic, expats who find themselves thousands of kilometres away from their homes have seen their lives turned upside down.

Shifting to teach online this semester because of Covid-19 is an opportunity for tertiary education to adapt to digital transformation.