Who are the foreign students following Vietnamese studies?

The demand for studying Vietnamese language and Vietnamese culture has been increasing as the country plays an increasingly important role in Asia Pacific and the world.

Prof Hiroki Tahara of the Ritsumeikan Asia Pacific University (APU) was one of the first students at the Center for Vietnamese and Southeast Asian Studies, the precursor of the Faculty of Vietnamese Studies under the HCM City University of Social Sciences and Humanities. 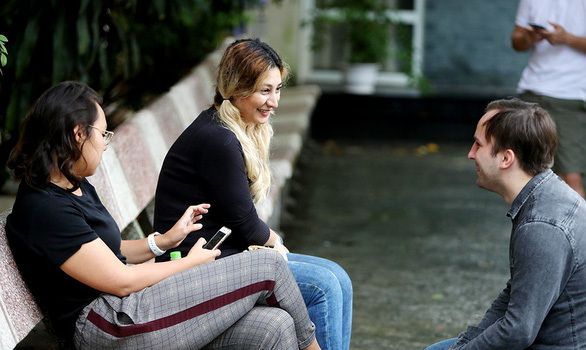 He began studying Vietnamese in 1991. After three semesters at the Tokyo University of Foreign Studies, he came to Vietnam to study at the Center for Vietnamese and Southeast Asian Studies.

Later, he worked for APU when the school was established in 2000. The school has taught Vietnamese language to 750 students from many countries, including China, South Korea, Thailand, the US and Mexico.

With the language and communication skills learned at the Faculty of Vietnamese Studies, Hiroki Tahara worked in diplomacy as an attaché at the Japanese Embassy in Vietnam, and together with his students went to the Central Highlands to do charity.

“Thanks to my Vietnamese skills, I can make friends with many people all over the world. Vietnamese is part of my flesh and blood,” he said.

In Vietnam, Apichit Mingwongtham from Thailand has become well known to many young people.

The visually impaired third-year university student in Vietnam is famous for two awards - favorite essay (for foreign authors) and first prize in the ‘Vietnam Letter 2019’ competition. Apichit wrote a moving story about the difficult journey he experienced when coming to Vietnam to learn Vietnamese.

Associate Prof Dr Le Giang, dean of Vietnamese Studies, said that 257 foreign students are following Vietnamese studies at the school under full-time training. Most of them are from South Korea, Japan, Thailand, Taiwan and China.

There are 64 postgraduate students in the faculty, including 12 foreign students.

Meanwhile, the number of short-term training courses has been increasing rapidly. There were nearly 7,000 students from July 2018 to June 2019.

According to Ngo Thi Phuong Lan, Rector of the HCM City University of Social Sciences and Humanities, Vietnam has an important position in the Asia-Pacific region. It follows a proactive, multilateral foreign policy, and attaches importance to high-tech investment flows from countries and territories.

Phan Thi Yen Tuyet, a lecturer at the Faculty of Vietnamese Studies, said Vietnam is attracting more and more foreign investors, so the demand for studying Vietnamese language and culture has been increasing rapidly. Vietnamese has been taught for a long time in In the US, China, South Korea, Japan, Thailand, Australia, France and Germany.

More than 800 foreign students in Nghe An have left the country to avoid the Coronavirus outbreak.