The natural taste of Thai

After checking-in at an eco-friendly retreat in the Pu Luong Nature Reserve in north-central Thanh Hoa province last week, I began to look for some local food nearby.

I decided on the Pu Luong Buffalo Restaurant after several scrolls up and down reading recommendations on its authentic dishes from the ethnic Thai people. 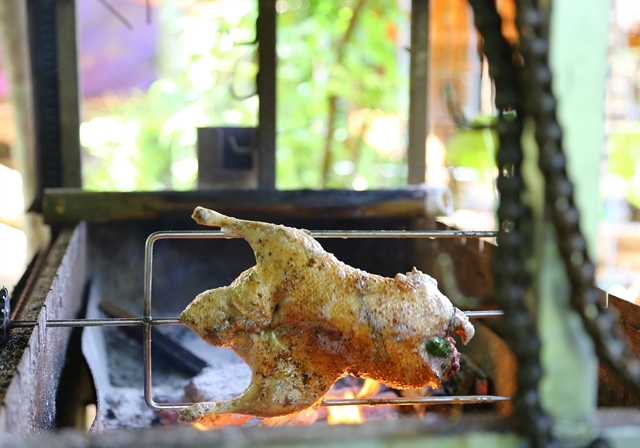 The duck is marinated and stuffed with local Thai spices before grilling.

There were actually few options to choose from this part of the world. We were, after all, in a nature reserve, where tourism services, including places to eat, are yet to fully develop. Guests generally eat at their homestay or lodge.

The Pu Luong Buffalo Restaurant is, in fact, part of the Pu Luong Hillside Lodge, about three kilometres from my retreat. It sits inside a Thai village, surrounded by mountain ranges and green terraced rice fields. As such, it inherits both the comfortable design of the lodge and astonishing views of the surrounding landscapes.

At first sight it appeared clean and hygienic, with guests welcomed with a cup of home-made pandan leaf tea, which was aromatic and quite relaxing.

There were not that many customers at lunchtime, as this was after COVID-19 had reared its ugly head once more. After making the necessary health declaration, I began to check out the menu.

The restaurant offers set menus at prices ranging from VND150,000 to VNĐ180,000 per person. But I came here with certain dishes in mind, and immediately ordered the Co Lung duck and some other signature local dishes.

Some were not in season, some have to be ordered in advance, while others take a long time to prepare. The famed duck was indeed available, but I would have to wait at least an hour for it be marinated and then grilled. But I was willing to wait.

Together with the duck I chose Thai-style steamed fish, boiled bamboo shoots, and steamed mountain snails.

As the duck grilled over the charcoal, I spoke with owner and head chef Ha THi Nghiem about the food. She explained that Co Lung duck is a rare and special breed from nearby Ba Thuoc District.

The droop-necked, short-legged duck’s meat is said to be very tasty, not greasy or foul-smelling like duck from other regions.

One reason for this is that her ducks are free-range rather than captive. They eat small fish and snails from the river and any leftover rice and maize from the fields.

For the Thai-style steamed fish, she soaked it in mac khen seeds, doi seeds, dill, chilly, and pepper, and wrapped it all inside a banana leaf before steaming.

With the duck having been fed on food from the river and fields, the fish raised in her pond, the bamboo shoots taken from the forest, the snails caught in the mountains, and spices and other ingredients coming from her garden, Nghiem promised me an authentic taste of Thai food. I couldn’t have been more excited.

After an hour, the duck finally arrived, presented on a flat winnowing covered with bamboo leaves to retain the fresh and natural concept.

The meat was indeed juicy and aromatic while the skin was moreish, with the taste and fragrance of the spices mingling in with the slight sweetness of a thin layer of honey the chef had basted on the duck for the last 10 minutes of grilling.

Following the “from-beak-to-tail” principle adopted by most Vietnamese chefs, the duck’s head and neck were cooked with sour bamboo shoots into a soup. A sip of the hot and sour soup at the beginning of the meal cleared the throat and wakened the digestive system.

The boiled bamboo shoots served with a mixture of crushed peanuts and salt were just okay. The shoots were soft enough to eat, but I expected the salted peanut condiment to be drier.

The boiled mountain snails get a thumbs down, as the dipping sauce, which plays an important part in the dish, was tasteless. But the snails were fresh and meaty at least. They are difficult to catch and much different to field snails or sea snails normally eaten in the city.

My greatest disappointment, though, was the steamed fish. Though the aroma of the spices and the banana leaf was pleasant, the fish itself was dry.

I asked the waiter which sauce goes with the fish, but he said there was no need for a sauce since it was sufficiently soaked in spices. It wasn’t.

Overall, though, it was a good experience in local Thai dishes, with fresh ingredients from the rivers, mountains, forests, and home gardens.

Dining out in the middle of mountains, trees, and rice fields was also a nice alternative. If I ever return to the Pu Luong Nature Reserve, I would give the restaurant another try, but perhaps call in advance to check on availability or try some other local specialties I missed out on this time.