At 6 a.m. on weekend, I and some of my friends began our trip at Tuy Loan junction. We enjoyed Quang-style noodle soup—a popular specialty for breakfast before driving to the heart of Tay Giang. The 120-kilometer mountainous route seems to be shortened by rustic and peaceful landscapes that we saw on the way.

We took a short rest at Prao Village in Dong Giang District. Then, we headed to A Tieng Commune in Tay Giang which is home to 20,000 local people only.

The po mu primary forest on Zi’lieng Mountain was our first destination. The 450-hectare forest is nearly 1,500 meters above sea level. The forest is well protected by Co Tu ethnic people as po mu is a sacred tree toward them.

During the half an hour walk under the shade of po mu trees, we saw numerous age-old trees in different shapes. Some were named after the shapes they seem to resemble, such as Tiger, Elephant, Dragon, etc. Under the foliage of the gigantic po mu tress were smaller ones.

In my opinion, po mu ecological village with traditional stilt houses is a place where tourists can get pleasure with local specialties.

We left the forest at 3 p.m. for Lang Commune to explore local culture. On the way, we stopped for a while to admire the charming beauty of terraced rice fields in Axan Commune as well as Que mountain peak in Tr’Hy Commune.

These centuries-old terraced rice fields surrounded by zigzag streams were outstanding in a big painting of nature on our way. The scenery reminds me of Shirakawago ancient village in Japan. Meanwhile, the peak of Que Mountain is likened to Sapa City, where photographers are mesmerized by the sea of clouds.

At 6 p.m. we reached Guol house, which is actually a kind of stilt house decorated with more elaborate carvings. We had dinner with Co To locals in the house. Next, we were served with locally made wine called ba kich while enjoying traditional dance performances.

On the second day, it was a chance for us to find out more about local history, culture and specialties. We visited Ta Lang community-based tourism village which is the first of its kind in Quang Nam developed by the Asian Management and Development Institute, the Vietnam Community Tourism Chapter and Green Truong Son Project.

The tourism village preserves traditional musical instruments made by the late Alang Avel artist and other cultural items. Dang Shen ginseng was also introduced at this site. The ginseng is a specialty which is expected to become a popular product in the coming time. SGT 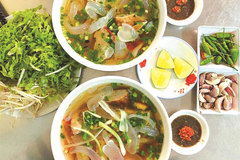