Located 40 km to the west of Hanoi, Duong Lam ancient village in Son Tay town is one of must-visit tourist destinations of the capital city because of its unique historical, architectural, cultural values.

In recent years, Duong Lam people have been working to preserve the village’s tourism environment, which is characterized by banyan trees, river wharves, communal house yards, and pagodas.

Duong Lam is famous for the birthplace of Phung Hung, a military leader who briefly reigned over Vietnam during the 8th century, and King Ngo Quyen, who ruled in the 10th century.

Ten of the 97 ancient houses in the village have been recognized as national relics with 50 other sites, including temples, pagodas, shrines, and ancient wells.

The oldest house in Duong Lam, owned by Nguyen Van Hung in Mong Phu hamlet, is nearly 400 years old. Behind its narrow gate, the ancient house made of locally quarried laterite is divided into five compartments standing on five rows of wooden posts. There is a spacious yard in the middle of the house. Over the centuries, the laterite walls have changed color to grey-brown.

Twelve generations have lived in this house, which attracted hundreds of domestic and foreign visitors each day.

Hung said to preserve the ancient house and develop tourism sustainably, environmental protection is vital, adding when “Duong Lam began to do tourism, the environmental sanitation sector has done well its job. Every morning workers collect garbage left outside each house."

The 400-year-old house owned by Duong Thi Lan is always full of visitors. The house belongs to her husband's ancestor – mandarin and teacher Do Doan Chinh. With three compartments and two lean-tos, it has been recognized as the ancient house of the first level.

Lan explains that the high threshold illustrates the status of Mr. Chinh, a respected  scholar. Every day, Lan and her husband receive up to 60 domestic and foreign tourists to visit. Many visitors have showed interest in staying overnight at the house to experience the locals’ daily life.

Lan says members of the local Women Association have guided tourists to follow environmental protection regulations of the village. "We prioritize the communications on environmental cleanliness, on not using nylon bags, and  particularly saying no to all plastic waste. Tourists have been good about not littering and helping us protect the village’s environment."

She added, "Visitors to Duong Lam are always full of admiration for the ancient village and its well-preserved customs, architecture, and culture. Tourists are told to dispose of garbage in the right places  to keep the village green, clean, and beautiful.”

Nguyen Trong An, Deputy Head of Duong Lam ancient village management board, said each year the village welcomes 50,000 visitors. The local administration has asked local households to abide by rules on  environmental protection and garbage collection.

"We’ve told the locals that keeping the environment hygiene, first and foremost, is for our own life, rather than for tourists, the government, or anyone else. It is a good way to impress visitors," An said. VOV5 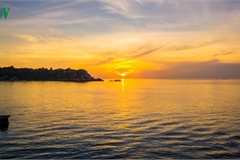