Located in Tan Phong Ward in District 7, the streets were almost empty as many from the Republic of Korea who left Vietnam have not been allowed to re-enter.

The streets derive their nickname from the fact that they accommodate a large number of stores mainly servicing the Korean community.

Just a few people were strolling along the streets last weekend, in stark contrast to pre-pandemic crowds that crammed the stores.

Many stores closed after seeing a fall of 70-80 percent in the number of customers from the Republic of Korea, including bars, massage parlours, and spas.

Four or five in a row were shut down on one particular street - evidence of the tremendous impact the new outbreak has had.

Store owners include both Vietnamese and Koreans unable to return to Vietnam, so had to close down. More shutdowns are expected in the future as Vietnam has shown no sign of allowing foreigners back anytime soon.

It barred entry to foreign nationals on March 22 and suspended international flights on March 25 in a bid to curb the spread of the coronavirus./.VNA 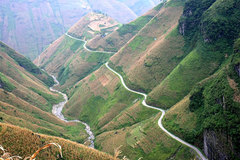