It’s also famous for its ancient houses which are around 200 years old and still feature their typical architectural structures.

From Hanoi, visitors can take Highway No. 5 to reach the village. Right from the village’s main gate (pictured above), it’s easy to spot the communal house, market, pond, stone bridge and many other architectural works in the village that date back 200 years.

Nom Village is a convergence of many interesting things. Mr. Pham Van Hieu, Deputy Head of the Hung Yen Provincial Department of Culture, Sports and Tourism, said that the village gate was built in 1855, in the shape of an octagon with delicate motifs only appearing in localities that royal family’s members lived in. Nom Village was granted such a privilege as it owned exquisite copper casting and had casted coins for the Nguyen Dynasty.

Located in the middle of rice fields and green gardens, a peaceful and quiet space of Nom Village is wide open to visitors’ eyes as they walk through the village gate. Perhaps it is one among a number of rare villages that still keep the familiar sights from the past to the current day. It features a jade green pond in the centre of the village, and on each side they have elderly of the community sitting on stone benches next to their chess boards. At the end of the pond is the communal house and the old banyan tree where local children swing on the tree’s roots.

Along the two sides of the pond are rows of areca trees and old houses, including residential houses and ancestral temples of the local clans. According to the deputy head of Hung Yen Department of Culture, Sports and Tourism, Nom Village still retains around nine ancestral temples of the Nguyen, Le, Phung and Ta families that are still intact, with typical architectural styles from around 100 years ago. Many old houses still retain tier intricate and sophisticated details and decorative motifs in a natural manner. These ancient houses connected by the pond have created a unique feature that is rarely seen even in other northern villages.

At the end of the pond is the village’s communal house, which is said to worship Tam Giang Saint, a general from Trung Sisters' reigning (AD 12-43). Legend has it that before he died, Tam Giang Saint wrote in his will to be buried in Nom Village, where he was once stationed. It is known that the banyan tree inside the communal house is nearly 100 years old.

Although many facilities in Nom pagoda are newly built or rebuilt, at present, the pagoda still holds more than 100 beautiful terracotta statues of Arhats. According to ancient documents, the pagoda was built during the Later Le dynasty. The terracotta statues here experienced severe floods in 1945, 1971, and 1986 but many still remain fairly intact.

In front of the pagoda is the Nom market with a special ancient architectural style which are built in separate rows that make people feel like they’ve been taken back hundreds of years.

One of the most popular places that’s worth visiting in Nom Village is the old house which is more than 200 years old, owned by Mr. Phung Van Long's family, with its five-bloc architecture, low tile roof and old brick yard. The wooden beams and gables are intricately and beautifully carved, and are still intact. Long said that someone came to pay billions of VND for the house but his family refused to sell it. It is common knowledge that there are a lot of old houses in the village which are kept intact by the villagers.

Nom Village also has a special stone bridge made by craftsmen, with nine spans and slate on its face. Each head of its piers is carved with sophisticated patterns.

As one of the few places still intact the typical scenery of the northern countryside, villagers in Nom Village not only preserve the ancient works of the whole village and each local families and clans, but also are still very conscious in preserving the village’s clean and green environment. Along the village roads, whether brick or concrete, there is no littering. Up until now, Nom Village has always been one of the favourite destinations for many domestic and foreign tourists, although an official tourist destination has not yet been formed here. 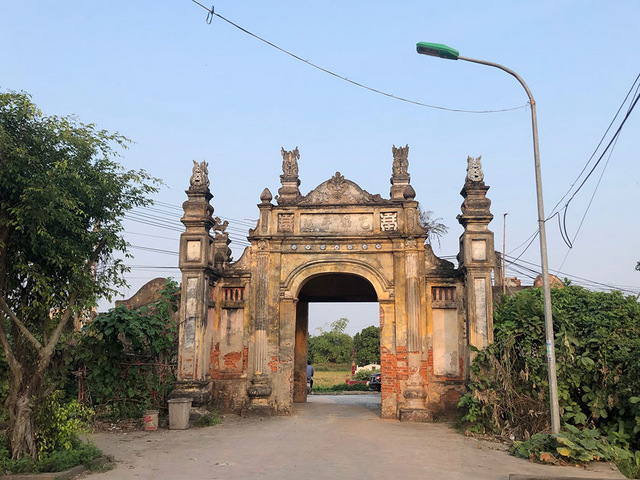 The ancient wooden carvings on the gate are still intact. 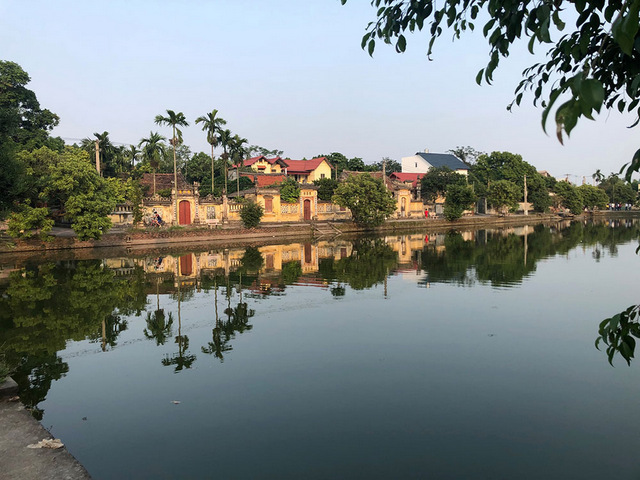 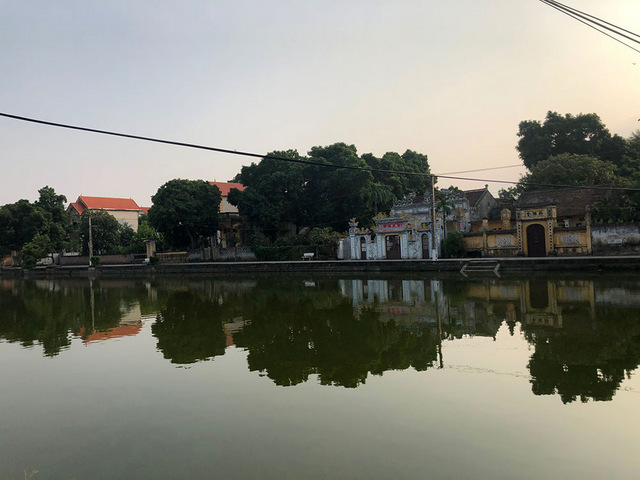 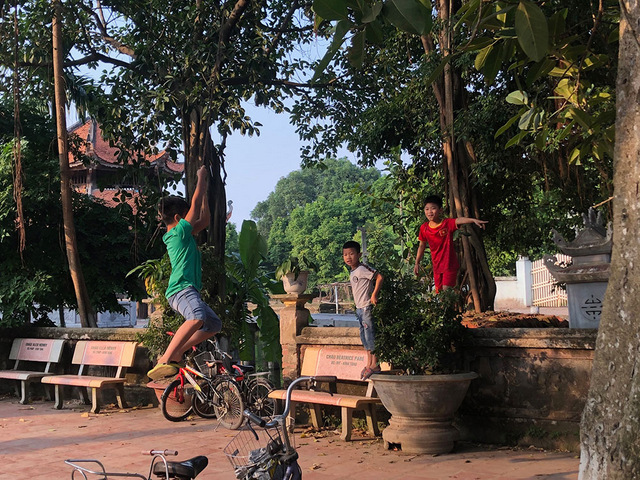 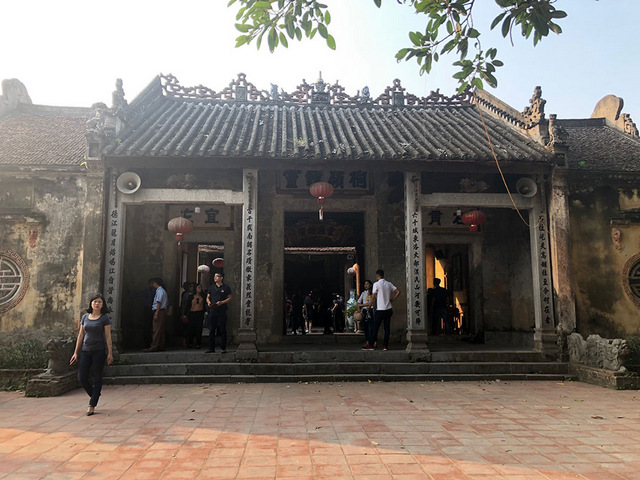 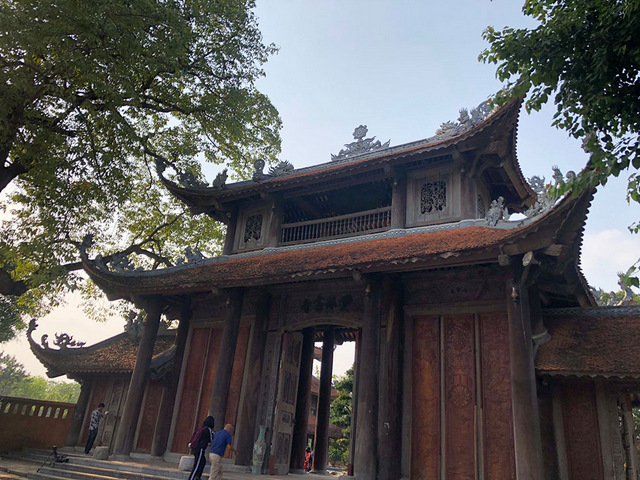 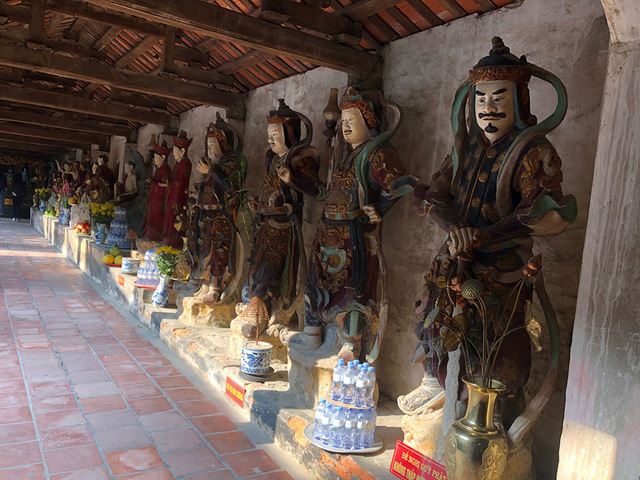 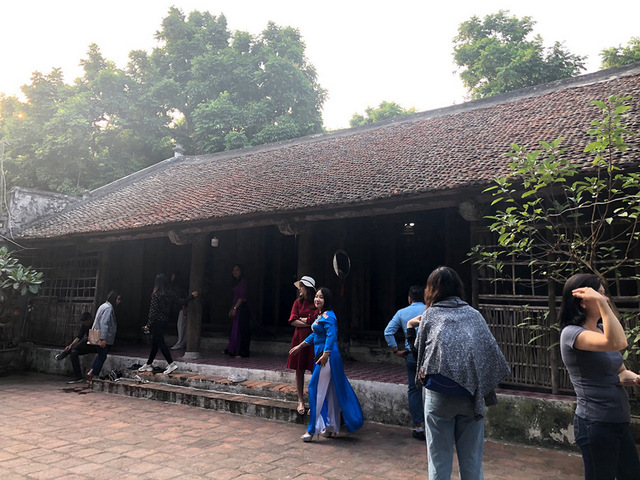 Ancient ancestral temples stand next to each other. 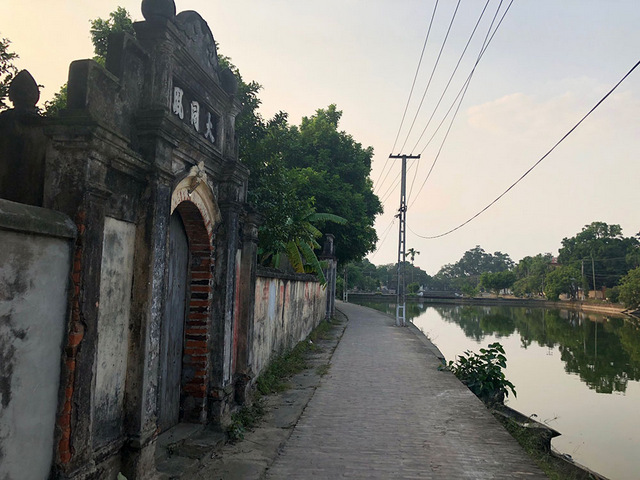