This area is famous for Shan Tuyet tea, taken from centuries-old trees that grow wild in the majestic Hoang Lien Son mountain range of northern Vietnam.

According to villager Mua A Pao, Shan Tuyet trees produce big, dark green buds and leaves, which have a white fuzz like a thin layer of snow. This explains the name Shan Tuyet – tea covered with snow.

Pao said, “The oldest trees are deep in the forest. Younger trees, a mere 100 years old, stand at the outer edges of the forest. All are accessible to tourists. Each local household is assigned 20-30 tea trees to care for and harvest.”

Visitors to Suoi Giang carry home with them mesmerizing visions of the forest landscape, memories of the local ethnic lifestyle, and the mild fragrance of Shan Tuyet tea.

In Suoi Giang’s memorial book, a tea specialist from the former Soviet Union – Academician K.M. Djemmukhatze of the Baku Institute of Biochemistry –wrote, “I have traveled through 120 countries that have tea production, but I have never seen tea trees as old as those in Suoi Giang. Are they the ancestors of all tea trees? A bowl of green tea here combines the 18 bitter tastes of all the other teas in the world”. Djemmukhatze came to Suoi Giang in the 1960s to study its tea.

The climate, soil, and water of Suoi Giang is ideal for Shan Tuyet tea trees to grow naturally. Vang A Tung of Pang Cang village said locals still tend and harvest the tea manually just as their Mong ancestors did.

Tung shared, “After harvesting, we trim the trees and clear the wild grass. We are totally non-reliant on fertilizer and pesticides. The trees grow on their own, absorbing all the nutrition they need from nature.”

Shan Tuyet tea leaves are picked three times a year. The last harvest is in the 9th lunar month. After separating out the old and worm-eaten leaves and buds, the Mong dry the tea in cast-iron pans on wood stoves.

The fire must be kept small and steady. The Mong rub the dried tea with their hands until the tea buds and leaves crumble to bean-sized buds covered with white dust.

To produce the best color and fragrance Shan Tuyet tea must be brewed in pure mountain water. First the tea is placed in a pot and rinsed with boiling water. Then the pot is filled with hot water until the bubbles disappear.

The lid is placed on the pot and the leaves are allowed to steep for several minutes. Then it’s time to sip this wonderful tea with the color of honey and a unique, strong flavor.

Sung A Nu, Chairman of Suoi Giang Commune’s People’s Committee, said a tea cooperative of 400 households has been established with a shared commitment to high-quality tea.

“The brand name of Suoi Giang Shan Tuyet tea, once established, will increase sales and boost the price, producing higher incomes for the local tea producers. Tea production is playing a key role in poverty reduction in Suoi Giang commune,” he noted.

Situated roughly 200 km from Vietnam’s capital, Moc Chau is widely considered to be one of the most pristinely beautiful plateaus in the north of the country. It is also famous for its vast green tea hills.

We were lucky enough to have a chance to visit Long Coc in the northern mountainous province of Phu Tho, which is considered one of the most beautiful tea plantations in the country. 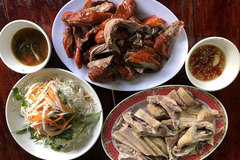