The beauty of bamboo waterwheels in Dien Bien Province

Rolling along the bank of Nam Hua Stream in Chieng Dong Commune, Tuan Giao District, Dien Bien Province, the bamboo waterwheels are not only an essential agricultural tool for locals, but they also add a charm to the majestic natural landscape of the north-western commune.

Water wheels always appear in the dry season along streams in the northwestern region. The simple bamboo water wheel is associated with the traditional farming methods of ethnic minority groups in mountainous areas.

Walk of fame for village’s shoes

Visitors to the northern province of Dien Bien are sure to be impressed by the colourful traditional outfits of the Xa Phang ethnic minority, in particular their sophisticatedly embroidered shoes. 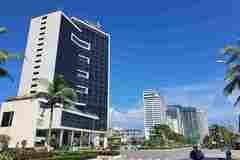