Many receive salary increases which, given the relatively low cost of living, provide them with far more spending power to enjoy everything the country has to offer.

The appeal of Vietnam has expanded greatly in the last few years and in particular, serial expats are setting their sights on the magnificent landscape, lively culture and positive work life balance, stated HSBC.

“This has seen Vietnam rank as one of the most popular choices for expats who already have experience living abroad,” the report suggested.

“Most expats moving to the country say they were able to quickly adjust to the way of life there, feeling at home within the first few months of arriving,” cited the report, putting this down to Vietnamese communities being welcoming and encouraging expats to get involved with their cultural events.

Expats are also pleasantly surprised by the benefits of working in Vietnam. Many receive salary increases which, given the relatively low cost of living, provide them with far more spending power to enjoy everything the country has to offer.

The top spot belonged to Switzerland, which has leapfrogged Singapore off its crown as the world’s top-ranked destination for expatriates.

According to HSBC, Switzerland – home to some of the biggest private banks, commodity traders and pharmaceuticals companies -  jumped from 8th last year as it garnered top marks for its earning potential and stability.

The average Swiss salary of US$111,587 is 47% higher than the US$75,966 mean pay package across the 33 nations surveyed by HSBC in the 12th edition of their annual expat country ranking. Seven out of 10 expats said they had more disposable income after moving to Switzerland.

Meanwhile, Singapore placed second, after topping the ranking for the past four years. Hanoitimes 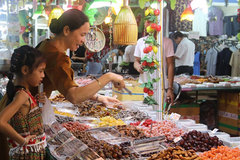