Bich, a final-year student from Ural Federal University, said she decided to enter the contest to help foreign friends learn more about Vietnam. 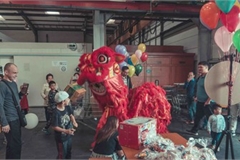