The Ministry of Labor, War Invalids and Social Affairs has received the request for food aid during the Lunar New Year 2014 and the pre-harvest season from 11 provinces. The government has decided to provide 20,000 tons of rice to them.

VietNamNet Bridge – The Ministry of Labor, War Invalids and Social Affairs has received the request for food aid during the Lunar New Year 2014 and the pre-harvest season from 11 provinces. The government has decided to provide 20,000 tons of rice to help the people of these provinces. 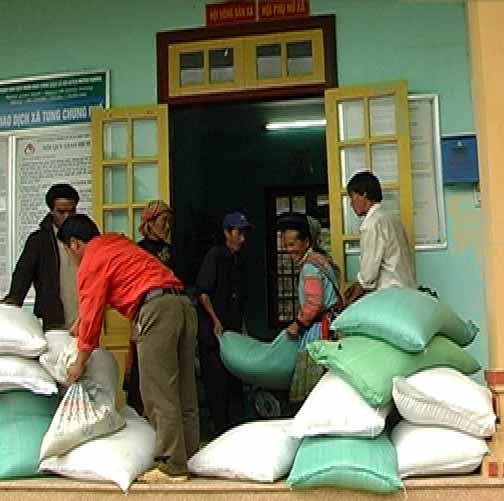 In particular, Quang Binh asked for the highest volume of rice with 5,200 tons, followed by Quang Tri with nearly 4,300 tons and Nghe An with 4,200 tons.

Photo: Storms and floods in the central region make people Nghe An, Quang Binh and Quang Tri fall into hunger.

On January 9, Dan Viet online newspaper quoted Mr. Thai Phuc Thanh – a senior official from the Ministry of Labor, War Invalids and Social Affairs as saying that Quang Binh, Nghe An and Quang Tri asked for huge amounts of rice because these provinces were seriously struck by storms in late 2013.

According to Thanh, other provinces are considering the situation to ask for food aid so no family will lack rice this Tet holiday.

"Recently violations related to food aid granting have been detected in many localities, and in most of the cases the local authorities granted food aid to the people who did not lack rice and the severity of violations compared to the previous years was not serious," Thanh said.

The Ministry of Labor, War Invalids and Social Affairs has established interdisciplinary inspection teams to monitor the grant of food aid in provinces, Thanh added.