The warehouse containing millions of bulbs of the Hanoi-based Rang Dong Light Source and Vacuum Flask JSC was burnt in the fire in August 2019. Head of the company admitted that a big amount of mercury leaked into the environment. 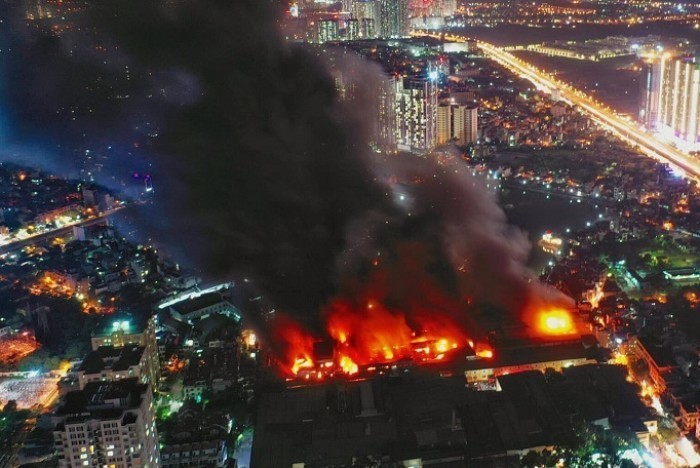 The Ministry of Natural Resources and the Environment (MONRE) and other agencies took investigation over the incident and came to the conclusion that the volume of mercury disseminated into the environment could be up to 27.2 kilograms, and the mercury concentration exceeded the safety line by 10-30 times.

Many families in the area had to evacuate until MONRE announced that the local environment became safe again.

The fear of mercury poisoning later settled down and the memory about the disaster finally dissipated like a cloud.

The incident led to a strong determination to relocate the factory to another place. In fact, the relocation plan was initiated a long time ago but no move had been taken.

In early October 2019, the tap water had a strange smell of burnt plastic.

Three barrels of waste oil were illegally discharged in Phu Minh commune (Ky Son district of Hoa Binh province). Under the rain, the oil went into the reservoir containing input water of the Song Da Water Supply Plant, which supplies water to Hanoi.

On October 15, Hanoians were told not to use the contaminated water from Song Da because of high styrene concentration.

The incident affected the lives of Hanoians. In the ‘water crisis’, the municipal authorities had to bring water in water tanker trucks to populous residential quarters.

Hanoi and HCM City topped the list of the localities with the worst air quality. The Air Quality Index (AQI) sometimes reached the dangerous level.

MONRE and the Ministry of Health recommended that people restrict outdoor activities and wear protective masks when going out.

In June 2019, 45 forest fire cases were reported in the central region which burnt down 293 hectares of forests.

According to the Vietnam Administration of Forestry, 156 forest fire cases occurred in the first six months of the year.

Rang Dong gives over $100,000 to rebuild houses destroyed in fire

The Rang Dong Light Source and Vacuum Flask JSC has agreed to pay more than VND2.4 billion (US$102,100) in compensation to nine families whose homes were damaged during a fire at the company’s warehouse last August, an official said on Monday.

Many provinces have been bracing for it following a forecast that the intrusion of seawater up rivers would be early and severe this year.