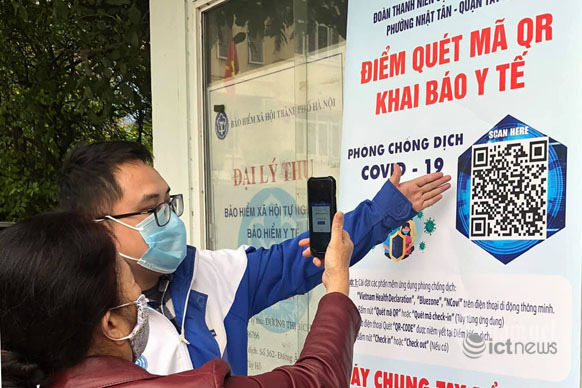 Hanoi, which imposed social distancing from 6 am July 24, detects people with symptoms of coughing and high temperatures on tech platforms such as Bluezone and tokhaiyte.vn.

In its Directive 17 dated July 23, the municipal authorities asked people to make health declarations daily on tokhaiyte.vn or NCOVI and Bluezone, and contact the local authorities and medical units when they have fever, cough, shortness of breath or loss of smell or taste.

Businesses that provide essential services and are permitted to stay open have also been asked to control all customers by asking them to scan QR Code when checking in.

As of mid-August, the number of health declarations via technological platforms had reached 13,600. Of this, 800 F0 and F1 (contacts of F0) cases had been found.

According to the Hanoi Health Department, on August 16, when screening 13,579 cough and fever cases reported by people via Bluezone and tokhaiyte.vn, the city found 95 positive cases.

From these cases, the city expanded monitoring and tested related cases. As a result, it discovered 691 more cases in the community. The total number of F0 cases discovered from screening people with suspected symptoms accounted for 40 percent of total F0 cases in the fourth outbreak.

Do Lap Hien from the National Technological Center for Covid-19 Prevention and Control said the number of F0 cases in the community has been flat in recent days.

“Within one week, since the day Hanoi began officially getting data from medical declarations on the platforms managed by the center, 14,000 declaration records were provided. 95 F0s and 700 F1s were found,” Hien said.