VietNamNet Bridge - Nearly 5,500 tons of rice from the national reserve will be provided to six provinces as food aid during the lunar New Year (Tet holiday) and the between-crop period 2014.

VietNamNet Bridge - Nearly 5,500 tons of rice from the national reserve will be provided to six provinces as food aid during the lunar New Year (Tet holiday) and the between-crop period 2014. 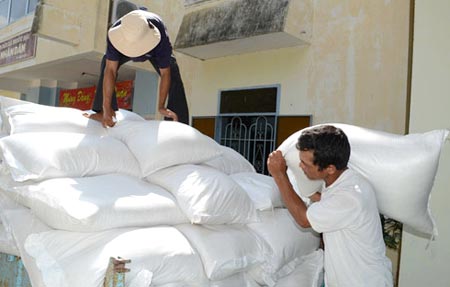 Prime Minister Nguyen Tan Dung has instructed the Ministry of Finance to grant 5,494 tons of rice as hunger relief for the provinces of Son La, Ha Nam, Ninh Binh in the northern region, Thanh Hoa in the central region, Kon Tum and Dak Lak in the Central Highlands.

The Prime Minister asked these provinces to grant rice to the right subjects and in a timely manner.

Other provinces are urged to report to the Ministries of Finance and Labor - Invalids and Social Affairs of the cases that need hunger relief so that rice will be delivered timely to people before the Lunar New Year 2014.

Earlier, on January 15, the Prime Minister assigned the Ministry of Finance to supply more than 12,000 tons of rice from the national reserve to nine provinces. Shortly after that, many more provinces asked the government to grant famine relief, totaling nearly 30,000 tons of rice.