7 Eleven does warm-up before entering Vietnam

VietNamNet Bridge – Thai 7 Eleven will be a un-doubtable rival to anyone in the Vietnamese market.

VietNamNet Bridge – Thai 7 Eleven will be a un-doubtable rival to anyone in the Vietnamese market. 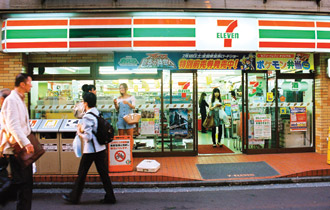 A 7 Eleven shop in Bangkok, Thailand.

7 Eleven gets ready to come to Vietnam

No official statement has been made by Thai CP All about its plan to join the Vietnamese market. However, sources affirmed that the retail chain would set up its first shop in Vietnam in district 1 of HCM City, within the upcoming 60 days.

Regarding the goods items to be displayed, the sources said that 40 percent of the products to be available there would be Vietnamese, while the other 60 percent would be from Thailand and other countries.

In the first 2-3 years in Vietnam, CP All would run 7 Eleven shops before new franchise contracts with Vietnamese partners are signed.

In fact, the presence of 7 Eleven in Vietnam is foreseeable. Foreign investors, believing that the Thai brand would come to Vietnam sooner or later, have been trying to expand their networks to get stronger.

Shop & Go, for example, opened the 100th shop on November 21 after eight years of doing business in Vietnam.

Shop & Go signs the cooperation contracts with business households on upgrading the family run groceries into convenience stores. In other cases, it makes investments itself from A to Z.

Aaron Yeoh It Ming, CEO of Cua Hieu & Suc Song JSC, which is running Shop & Go, has revealed that the company would open 30 more shops at least in 2014.

Meanwhile, Kigure Takehiro, President of Gia Dinh Viet Nam, which is managing Family Mart chain, said the company would pour $20-25 million into 300 shops to be opened in the next five years.

Being steadfast with the plan to open 500 Ministop shops by 2017, the Japanese retail group’s core business strategy is focusing on the Aeon Mall – the hypermarket chain. The first shopping mall with the huge investment capital of over $100 million is expected to make debut in Tan Phu district in HCM City soon.

Domestic retail chains have also been hurrying up with their plan to expand retail networks. Co-op Food, belonging to Saigon Co-op, has got 117 shops, while Hapro has got 700 shops, mostly located in Hanoi and HCM City.

Both Co.op Food and Hapro are following the plan on opening 10-15 more shops every year.

Pham Viet Anh, President of Left Brain Connector, noted that convenience store chains can succeed only if they can increase the coverage of the distribution channels and create differences to their products.

With the initial investment rate of VND1.5 billion for every convenience store, a retail chain needs to have at least 30 shops to break even.

At 7 Eleven shops, fast food may account for up to 60-70 percent of the total products. Analysts believe that 7 Eleven shops would bring the opportunities to CP group to develop the 3F model in Vietnam.

After the last two decades of operation in Vietnam, CP has had the first 2F – feed and farm, and it may have the third F (food) soon.

Chamnan Wangakkarangkul, Deputy General Director of CP Vietnam, said the company will have 10,000 retail shops in Vietnam, while 7 Eleven would serve as the springboard for CP to conquer the market.