A feast worthy of the name 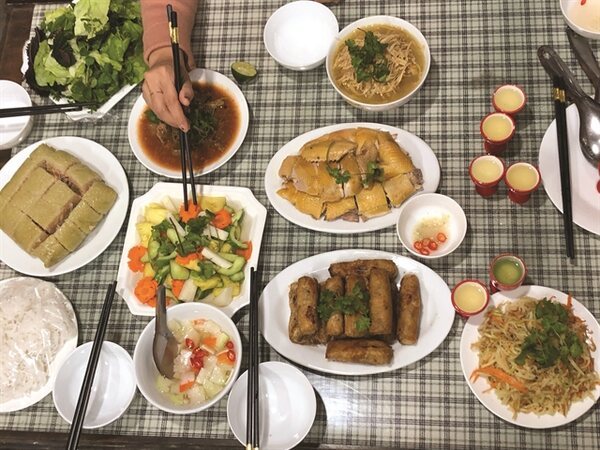 The chef is now over 70. She used to live in Hanoi’s Old Quarter, where home cooks are known not only in the capital but also countrywide for their refined methods. She was trained by her mother and mother-in-law, and has now passed down the craft to her daughter-in-law, who doubles as her sous-chef.

The house is traditional, with a large terrace filled with greenery and ceramic tiles. Inside are three tables for guests.

The feast did indeed fill us up, with a range of different dishes. There are generally seven plates and three bowls of food on a full festive table of Bat Trang delights.

The pigeon stew featured pigeon stuffed with a delicious filling of minced meat, vermicelli, and mushrooms. As typical as the ingredients may sound, as the majority make up Vietnamese meatballs, the boiling process, combined with the flavour of the pigeon, gives it a special taste hard to find elsewhere.

The pork skin soup apparently has up to 12 ingredients. Typically eaten only over the Lunar New Year (Tet) holiday or at wedding feasts, it was equally yummy.

Dried squid is a specialty at Bat Trang, found not only in the bamboo shoot soup but also the stir-fry. The stir-fried kohlrabi and squid stood out to me for two reasons: I’ve had stir-fried kohlrabi many times but never with dried squid, and they use thinly-sliced yellow dried squid instead of fresh, white squid. The drying process adds a much more pungent flavour and savour to the stir-fry, and I savoured every moment of it given I’m unlikely to come across it again outside of Bat Trang.

The spring rolls were equally unique. While every family makes their own, these featured fresh rather than minced dried shrimp and had a different rice paper wrapping. There was also less meat compared to the typical homemade spring rolls I’m used to. I found them a little oily, but they were still a big hit with many of our group.

The beef stew was delicious too. My grandmother often makes it whenever I go home for a holiday, since it’s one of my favourites. And here it’s also made very well. With bread also dip into the flavourful soup, every super tender bite was a delight.

Our order was specially added with banh chung (glutinous rice square cake). The cake was cut very differently as well. Typically, it’s cut into eight pieces, the way a birthday cake may be cut. At Bat Trang, though, they cut it into 16 mini squares. Since we were all so full from the other dishes, the smaller bite was the perfect size to let us try this local version of a Tet (Lunar New Year) dish loved by all Vietnamese.

Some people at the office found the dishes quite salty, but that didn’t overly bother me.

Towards the end, we took a table outside for a dessert of “xoi che” - glutinous rice with Vietnamese sweets cooked from yellow bean and cassava. A warm tea cup accompanied it to balance out the sweetness. Having dessert outdoor was ideal, since we not only got to enjoy the sunshine but everyone squeezed around one table and we got to bond over good food and good company.

Reservations are a must. A full set is designed to serve six to seven people. If you go in a group, you can also give pottery a try or go to nearby Ecopark to enjoy luscious green spaces hard to come by in downtown Hanoi.