Gold prices in Vietnam are much higher than international prices, driven by a supply-demand imbalance and price manipulation. A tael (37.5g) of gold in Vietnam is about US$500 more than in the rest of the world. 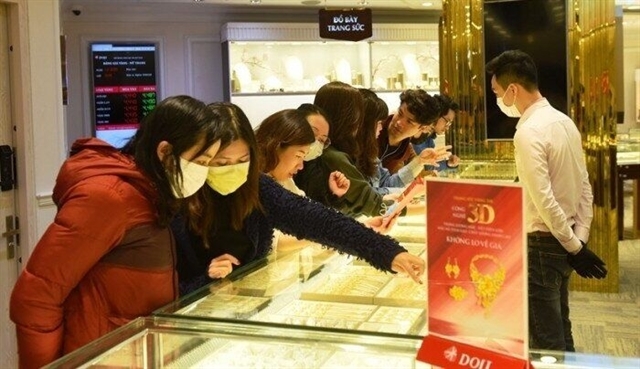 While the price of local SJC gold has increased by nearly 10 per cent, or VND 5 million, the price of world gold decreased by about this amount in the same period.

Compared to the prices listed on the global gold exchange, which rated gold at $1,810 per ounce, or $2,175, each tael of gold in Vietnam was $500 higher than the world prices.

Gold buyer Kim Oanh, in Tan Binh District, HCM City, said that she used to buy gold to keep as an asset and only sold when she needed money.

Oanh now does not dare to buy gold for that reason as the big gap in prices between domestic and world market. She said: " Now if I buy a tael of SJC gold, I immediately lose more than VNĐ11 million for it, compared with the world prices."

Nguyen Thi Thanh, the owner of a gold shop in District 9 in the city, told local media: “Since earlier this year, many of my customers tell me they would patiently wait for the domestic gold price to close with the world prices for buying. But the longer they wait the bigger gap. In the past, the domestic gold price was usually only VNĐ1 million or VNĐ2 million higher than the world’s prices; now it was much higher.”

Thanh said at the beginning of this year, the gap was about VND7 million, but now the difference was up to VND11 million to VND12 million per tael. Thanh added: "It is because domestic gold is too expensive, so purchasing power is meagre and the market is quiet."

Explaining the unusual gap between the domestic and international gold prices, To Thanh Hiep, General Director of SBJ, said: “The scarcity of SJC gold supply is the main reason leading to the difference between gold prices around the world."

Hiệp said that the price of SJC gold was higher than the world’s prices because there was an unbalanced supply and demand in the market, adding: "Whenever the buying volume exceeds the selling volume, the SJC gold price increases sharply compared to the world and vice versa."

Huynh Trung Khanh, senior advisor of the World Gold Council in Vietnam, and Vice Chairman of the Vietnam Gold Traders Association, said: “The State Bank of Vietnam (SBV) is the only place authorised to import gold, including raw gold. In the past ten years, SBV has not imported more raw gold to produce SJC gold bars while people's demand to buy SJC gold still exists.”

According to Decree 24/2012 on the management of gold trading activities, gold bars are produced exclusively by the State and SBV is assigned to organise and manage gold bar production activities.

As a financial expert, Duong Anh Vu said inexperienced gold investors who "surf” gold were almost certain to lose money in this context when the gap between domestic and world gold prices was so obvious.

Therefore, Vu said: “It is not the right time for investors and people to choose gold as an investment channel in large quantities.”

In other words, he said if investors bought gold at this time, it would be difficult to make a profit. He advised: “If there is an urgent need to buy gold, people should only buy a small amount. Investors, especially ones with low capital, should only hold gold in the medium and long term and spend about 20 per cent of their savings to buy gold.”

As a professional gold investor, Tuan Minh said that there was a phenomenon of speculation in the gold market as some businesses had pushed the price of gold up very high when they saw that the supply was not enough.

Minh told local media: “Some businesses keep the gold price high or push the difference between the buying and selling prices to increase the risk to consumers.”

Therefore, Minh said the authorities needed to find solutions to limit speculation and price manipulation and suggested that SBV should create policies for the local gold market integrating with the world to reduce disadvantages for local gold buyers.

The gap between the gold price in the domestic and global market has hit the highest level in years due to a restricted supply and rising local demand.