AFC congratulates Vietnam as the host of Asian Cup 2014

The Asian Football Confederation (AFC) has sent letters of congratulation to Vietnamese officials after the victory of the Vietnam women's football team at the qualifier round of the Asian Cup 2014.

VietNamNet Bridge – The Asian Football Confederation (AFC) has sent a letter to Ms. Nguyen Thanh Ha, Vietnam’s representative at the AFC Women's Football Committee and Mr. Tran Quoc Tuan - the standing member of the AFC Executive Committee - to congratulate Vietnam as the host of the Women’s Asian Cup 2014. 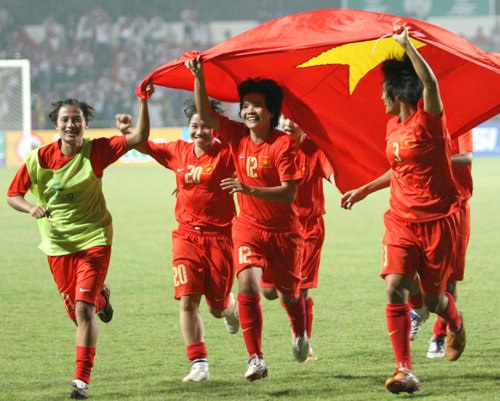 Earlier, AFC identified Vietnam and Australia as the two finalists in the race to host the biggest event for women's football in Asia. But then Australia withdrew and Vietnam became the only candidate.

AFC did not state whether it gave the right to host this event to Vietnam -- is because one of the prerequisites is that Vietnam has to enter the finale of Asian Cup 2014. After Vietnam women’s national football team, led by Chinese coach Chen Yun Fat, topped Group C in the qualifier round of Asian Cup 2014, AFC officials sent letters of congratulations to Vietnamese officials.

However, there are still a few minor issues that Vietnam needs to complete to be eligible to host this event. It is the commitment of support of the Vietnamese government and Vietnam has to prove that its infrastructure and security are eligible to host the event.

In early June, the AFC will send a delegation to Vietnam to check facilities. The Vietnam Football Federation (VFF) will also have to prepare the profiles and procedures required by the AFC, including the government’s permission to host the event.

If Vietnam hosts the 2014 Women's Asian Cup, the women's soccer team of Vietnam will have a great opportunity to reach the World Cup for the first time.

At this world competition, Asia will have five representatives. The first four cards most likely belong to the leading teams - Japan, China, South Korea and Australia. The 5th card will be competed by the four remaining teams, including Vietnam.