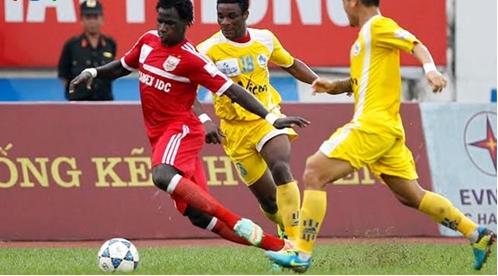 Entitle “Dieng makes it four-out-of-four for Binh Duong”, the article reported that Dieng came back to haunt his former employers on Jan. 22 when the Senegalese striker grabbed a late winner against Song Lam Nghe An to make it four straight victories for V.League 1 champions Binh Duong.

Dieng, who played for Song Lam in 2012 and made three appearances in that year’s AFC Cup, struck in the 90th minute just when the Round 4 match in Vinh appeared destined to be a goalless draw and mark the first dropped points of the fledgling  season for Binh Duong following wins over Danang (3-2), Quang Nam (4-2) and Dong Thap (6-1).

With five goals in four matches the early season form of the 30-year-old attacking midfielder will not have gone unnoticed by Binh Duong’s AFC Champions League 2015 Group E rivals Jeonbuk Motors of the Republic of Korea, the 2006 ACL champions, and China’s Shandong Luneng, the article noted.

The fourth participant in the group is yet to be confirmed and will be determined via the qualifiers, with  Japan's’ Kashiwa Reysol, 2012 AFC Cup semi-finalists Chonburi from Thailand, and Hong Kong’s Kitchee, who made the final four of last year’s AFC Cup, all in the reckoning.

The qualifying round of AFC Champions League will officially kick off on February 24, 2015. Bexamic Binh Duong is pinned high hope to make further progress at the event.