Thailand’s Amata Corporation Public Company Limited has said it will develop two more industrial-urban complexes in Vietnam worth billions of USD on the back of the successful Amata Industrial Park in Bien Hoa City, Dong Nai Province.

Thailand’s Amata Corporation Public Company Limited has said it will develop two more industrial-urban complexes in Vietnam worth billions of U.S. dollars on the back of the successful Amata Industrial Park in Bien Hoa City, Dong Nai Province. 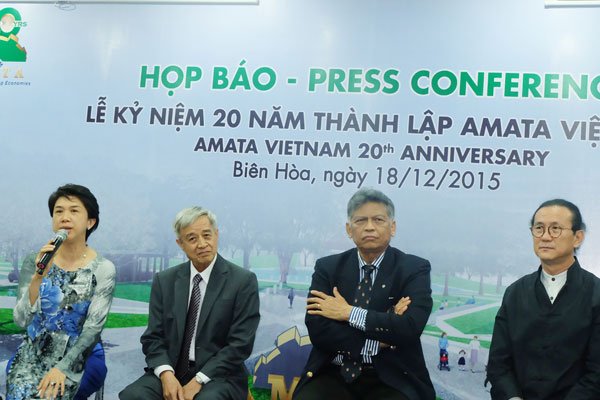 Somhatai Panichewa, president of Amata Vietnam, told a media briefing last Friday on the occasion of the firm’s 20th birthday that Amata City Long Thanh would cover 1,285 hectares in Long Thanh District in the same province at a cost of US$634 million. This project has three components, namely a hi-tech industrial park, a residential area and an urban-service area.

Somhatai said Dong Nai had presented an investment certificate for the hi-tech industrial park worth some US$282 million. Infrastructure for the 410-hectare park will begin construction from the end of 2016 and it will be ready for investors in hi-tech and automation sectors to set up shop from 2017. The residential area will go up on 753 hectares and the urban-service area on 123 hectares.

Panichewa said once in place, the project would turn Long Thanh District into a modern industrial city to contribute to socio-economic development in the province and Vietnam as a whole.

Amata City Long Thanh is in a prime location as it is next to the HCMC-Long Thanh-Dau Giay Expressway, which cuts travel time between Dong Nai and HCMC from two hours and a half to 15 to 20 minutes. In addition, it is near Long Thanh International Airport now underway and seaports.

Apart from Dong Nai, Amata and its partners are working on a hi-tech industrial-urban complex in the northern province of Quang Ninh at a total cost of around US$1.6 billion. Covering 5,789 hectares, Amata City Halong would be home to investors in automation, biotechnology, information technology and electronics sectors.

The project developer will encourage investors to establish research and development centers, logistics services, exhibition centers and science laboratories there. With this project, Amata expects to generate US$5 billion in annual revenue and create some 300,000 jobs.

Amata City Halong is also conveniently accessible by road, water and air as it is located near major airports and seaports in the north, Somhatai said.

She said Amata Vietnam had decided to expand investment activity in Vietnam as it has gained big success here.

“Vietnam is integrating deeper into the regional and world economies, which is evident in the ASEAN Economic Community (AEC), the free trade agreement between Vietnam and the European Union, and the Trans-Pacific Partnership (TPP),” she said.

“To join the global market, Vietnam is building its legal system in a way that creates favorable conditions for companies to do business. This is a big chance for Vietnam as well as Amata to lure foreign investors, especially those in the hi-tech sector.”

Amata has partnered with over 1,000 major Thai firms which want to branch out to other nations, especially fast-growing markets like Vietnam, said Vikrom Kromadit, founder of Amata Corporation PCL.

Amata Corporation PCL is among Asia’s leading industrial estate developers with three industrial parks in Thailand and Vietnam. The three cover some 100 square kilometers in total and are now home to over 1,100 enterprises from 30 countries and territories.

Established in December 1994, Amata VN PCL is a venture between Amata Corporation PCL and Sonadezi Bien Hoa. It was transformed into a shareholder-owned company in 2009 and has floated shares on the Stock Exchange of Thailand from December 16.

Amata Industrial Park in Bien Hoa City has attracted 145 investors, chiefly multinationals from 21 nations and territories, which have pledged total investments of over US$2.34 billion and created 43,000 jobs.

Amata also introduced a book named Amata’s 20 years of success in Vietnam to celebrate the 20th birthday of Amata VN PCL. The book is written by Vikrom Kromadit and Dr. Surin Pitsuwan, chairman of Amata Corporation PCL and former general secretary of ASEAN in 2008-2012. This is the third book written by Vikrom in Vietnamese.