Vietnamese Ambassador to Russia Dang Minh Khoi has highlighted Vietnam – Russia ties as well as the significance of the upcoming Russia visit by President Nguyen Xuan Phuc from November 29 – December 2. 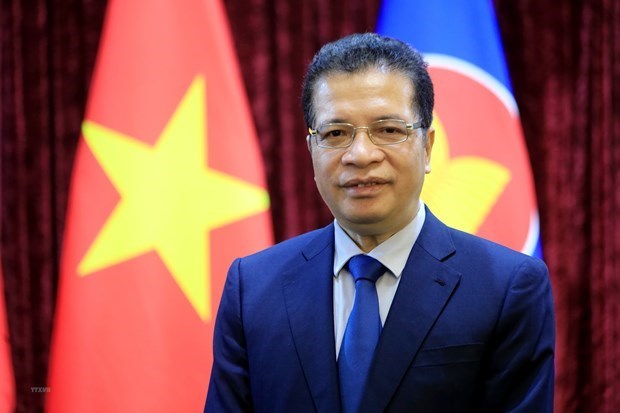 In an interview recently granted to Vietnam News Agency reporters in Moscow, Khoi said Vietnam – Russia ties are close-knit, loyal and rare in the world.

He said said the visit will further deepen and lift bilateral comprehensive strategic partnership to a greater height in all areas in the new situation.

It manifests that Vietnam is pursuing the foreign policy of independence, self-reliance, multilateralisation and diversification of ties for national benefits, as well as for the world peace and stability.

The visit also shows that Vietnam attaches importance to ties with Russia, considering the country a priority in its foreign policy and a key partner while sincerely and consistently supporting Russia in an ever-changing world.

Third, it affirms the strengthening of joint work against COVID-19 pandemic, especially in the research and production of vaccines and medicines.

More importantly, it will also boost links in all areas, especially in politics, economy, national defence-security, energy - oil and gas, education-training and people-to-people exchange, he said.

He also underscored achievements in bilateral cooperation in defence-security, energy – oil and gas, economy, trade and investment, and education and training.

Asked about which fields could be strengthened to boost ties, Khoi said both sides agreed to further share experience in fighting epidemics, and jointly study and produce vaccines and medicines. Vietnam could become a Sputnik V vaccine production hub of Russia in Southeast Asia.

He suggested cultivating collaboration in economy-trade, national defence-security, the use of nuclear energy for peace purpose, education-training and people-to-people exchange.

The diplomat also highlighted the Vietnamese Embassy in Russia’s contributions to the fight against COVID-19 pandemic at home, including establishing a working group on vaccines, seeking the transfer of Spunik V vaccine production technology as well as Sputnik V supply to Vietnam.

Vietnam’s vaccine diplomatic policy has been a success in the world, including in Russia, he stated.