The Vietnam Association of Architects have expressed opposition to a 10-floor hotel construction on Dinh Hill area in the Central Highlands province of Lam Dong’s Da Lat City.

The association has sent a document to provincial authorities expressing their disagreement on the hill revamp plan.

Nguyen Tan Van, the association chairman, said that the association has received opinions from many architects who opposed the construction. This was evidence of the social responsibility and code of ethics held by architects as Dinh Hill was a Dalat City and Lam Dong Province icon. 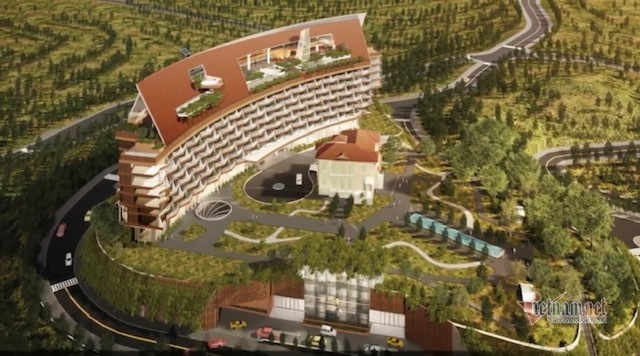 The planning of a 10-floor hotel construction in Dinh Hill

Dinh Hill is considered a golden land plot because it is the only remaining major green space in the centre of Dalat City with a commanding view in all four directions. It is the former provincial governor's palace which was built by the French in 1910.

Under the association’s proposal, Lam Dong authorities should not carry out the plan.

Last year, Lam Dong Province approved the hill construction, which is part of the planning of Dalat City and its neighbouring areas by 2030 approved by the government earlier.

From August 14 to September 14, the province presented three options for the hill revamp to seek the public opinion. Besides building a 10-floor hotel, other facilities will also be constructed, while a large area of green space will be destroyed.

Earlier, nearly 80 architects sent a petition to the Ministry of Construction and Lam Dong Province’s authorities to protest against the Hoa Binh Theatre area construction. According to the project, Hoa Binh Theatre will be demolished to build a modern entertainment complex, while a shopping centre and an underground parking lot will be built at Da Lat Market area.

Sculpture artist Pham Van Hang said that Da Lat is well-known for its green space. It is essential to restore works which have deteriorated, but this needs to be considered how to protect the local natural beauty.

Architect Ngo Viet Nam Son said more high-rise building projects have been allowed on Da Lat’s hills, which seemed to be a fault in the city’s tourism development strategy. Visitors come to Da Lat to enjoy its natural beauty, not to see such buildings.

Authorities in HCM City have called for the restoration of the HCM City Fine Arts Museum which is being badly affected by the on-going The Spirit of Saigon Tower construction project.

The Department of Culture, Sports and Tourism had submitted a report to the HCM City People's Committee and other agencies about the damage at HCM City Fine Arts Museum caused by the construction activities of The Spirit of Saigon Project.

Three rooms of the museum and a guard room have cracks while the ground which is adjacent to Le Thi Hong Gam Street subsided and there are cracks on the titles. The fence also tilts outwards, threatening passers-by.

The investor, Saigon Glory Company, was asked to deal with the damage to the fence, gate and the ground of the museum by October 8.

HCM City People's Committee asked the investor to work with an authorized agency to test and evaluate the cracks and subsidence at the damaged rooms in order to fix them by November 19. After the restoration is completed, the Department of Construction will report back by November 26.

The Spirit of Saigon is a VND12trn (USD521m) 8,600 square-metre double-tower project with 214 high-end apartment units for sale.

It is located near many famous landmarks such as the Bitexco Tower and Ben Thanh Market as well as the HCM City Fine Arts Museum. VietNamNet/Dtinews/Laodong

A Da Lat in the central region

Banh tieu xoi (Vietnamese donut with sticky rice) is one of the superbly tasty dishes of Da Lat in the Central Highlands province of Lam Dong, according to Hanoian Le Hoa.