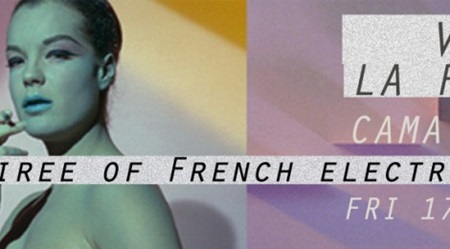 French DJs Vive la Fete, La Femme, Sexy Sushi, Stereo Totale Feu! Chatterton and Stereolab, as well as Arbre from Canada and Analogeliza from the UK will hit the decks.

Chanson française, dark electronica, electro-clash and many more will be spun on the night, which will start from 8pm at 73A Mai Hac De Street.

The show will feature artists from Saigon Dub Station, an organisation promoting reggae music and related genre in HCM City. They will joined by Maraphoria and Starchild.

Paris-based DJ performs at The Observatory

Paris-based DJ Rork, owner of STALWART recordings, will perform at The Observatory on Saturday.

The artist started his career in 1993 and became one of the pioneers of house music in France. He has toured major cities including New York, London and Hong Kong.

The Observatory's DJ Hybia Line will support Rork during the event.

The show begins at 10 pm at 5 Nguyen Tat Thanh Street in District 4. Admission is free before midnight, and VND100,000 afterwards.

The singer, who studied at Canada's Humber College in the music programme for jazz saxophone and woodwinds, will play her own compositions, a blend of reggae and neo-soul music. She will perform along with female DJ Maraphoria.

The concert begins at 9pm. The venue is at 5/7 Nguyen Sieu Street in District 1.

The songs will be covered by the seven-member HCM City-based Oceanline band.

German photographer Matthias Meyer will unveil his exhibition entitled Disorientation – A Small Paris in Ha Noi at the Goethe Institute from July 21.

The exhibition showcases Meyer's art project that he started in 2011. He has been using a particular kind of photography to discover and present the secret parts and the coexistence of different cultures in the cityscapes of Ha Noi and Paris using double exposure.

The exhibition will present 20 pictures that display clever superimpositions on how strongly the two cities are related to each other.

The combination of different space, colour and contrast in the photographs emphasise the architectural heritage Ha Noi and Paris share.

The exhibition will run until July 26, 9am-5pm.

An online meeting to discuss the development of a safe and friendly tourism industry has been ongoing at the Vietnamese government website.

The participants of the meeting are discussing how the service quality can be improved and tourism be made environment friendly.

Service quality and a friendly environment are the two key factors for attracting foreign tourists.

The number of international tourists arriving in Viet Nam in the first six months of the year decreased 10 per cent year on year.

The government's policy is to boost tourism growth. Recently, it granted one-year visa exemption to visitors from the United Kingdom, France, Germany and Spain, as well as Italy, and a five-year exemption to Belarusians.

The participants of the online meeting are representatives of the Viet Nam National Administration of Tourism, the northern province of Nam Dinh, Viettravel tourism company and JBT-TNT tourism company.

Recent state recognition of the contribution of certain artists has stirred a public outcry that the selection process is unfair.

Thanh Hang, a locally famous artist, has not been bestowed with the People's Artist title

The concern is that those who were awarded official recognition were already in high cultural positions at the central and local levels and ignored lesser but more talented artists.

Recognition depends on popularity, that they have worked for at least 20 years in their field, and have already won at least two national golden prizes.

Critics say it encourages artists to race for medals in order to gain state recognition.

The title appears to favour artists who are now officials.

Artists have raised their voices over the selection process in bestowing the People's Artist title, saying the process is “unfair”.

Danang City is organizing a free tuong (Vietnamese classical opera) performance program at the outdoor stage by the Han River to serve local people and visitors, according to the Vietnam News Agency.

The show is set to take place every Sunday evening until the end of September.

Along with the performance are a number of entertainment activities for visitors, with actors and actresses dressed as different characters on the spot, paper masks drawn by local artisans, and tuong costumes leased to visitors for photography.

The program is aimed at popularizing and maintaining the art of tuong, which has been recognized as a national intangible cultural heritage.

Tran Ngoc Tuan, director of Nguyen Hien Dinh Tuong Theatre in the city, said the street tuong performance may surprise locals and visitors but gradually, it would become a scheduled activity in the city.

He also suggested such performances be combined with other street activities such as flea markets and food stalls to diversify entertainment activities to lure more tourists.

An exhibition on photos, films and documents featuring the ASEAN Community in Viet Nam is being held in the central province of Quang Binh, from July 14-17.

On display are 200 photos, 50 films and reportages on member nations in ASEAN and their people, culture and traditions, environmental protection and response to climate change.

Speaking at the opening ceremony, Deputy Minister of Culture, Sports and Tourism Truong Minh Tuan said the year 2015 will mark the establishment of the ASEAN Community and the 20th anniversary of Viet Nam’s participation in ASEAN.

The exhibition aims to foster regional people's involvement in setting up the ASEAN Community for peace, stability and development, he added.

The event is expected to raise local people's awareness of the establishment of the ASEAN Community, which is by December 31.

The 2015 Nha Trang Sea Festival concluded on July 14 in the central coastal province of Khanh Hoa after an eventful week, luring nearly 150,000 Vietnamese and foreign visitors.

Addressing the closing ceremony, Vice Standing Chairman of the Khanh Hoa People’s Committee and Head of the organisation board Tran Son Hai said the festival was a success, leaving an impression of a beautiful, hospitable and friendly Nha Trang city.

Through the festival themed “Peace and Creativity”, the organisation board aimed to call on the community to do their utmost to protect national sovereignty, preserve the maritime environment and promote the value of the sea and islands, he said.

Over 50 festive, cultural and sport activities throughout the week introduced the unique culture of Khanh Hoa, honouring the beauty of the sea and islands that play a significant role in local life.

Train fares fall for the summer

The Hanoi Railway Corporation will reduce fares by up to 15% on the north-south route from now to September 5 to attract more travellers to long-range train travel.

Trains departing from northern stations such as Hanoi and Dong Le to southern destinations like Nha Trang and HCMC will have fares 2-15% lower.

For the first time Vietravel will offer new tours to central Quang Binh province with direct flights from Ho Chi Minh City, which will make it easier for tourists to discover both the province’s beautiful beaches and its caves.

For VND6,790,000 tourists can explore the ‘heaven on earth’ scenery of Asian’s longest cave, Thien Duong, and take a Zipline trip over the Chay River.

The cave and the river form part of the UNESCO World Heritage Site of Phong Nha - Ke Bang National Park.

After the adventurous trip tourists can then relax under the blue sky on the smooth white sands of the five-star Sun Spa Resort.

Tours depart every Thursday and Sunday. Call 0938 301 399 for more information or email sales@vietravel.com.