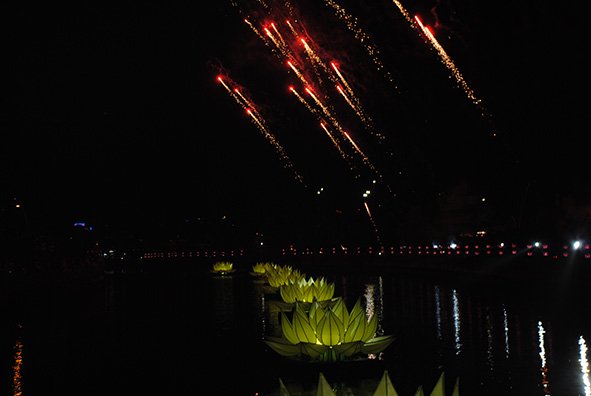 The Institute of the Buddha of Mercy on Monday night hosted a ceremony to light up seven golden lotus lanterns to mark the Vesak (the Buddha’s birth, enlightenment and death) on Nhieu Loc-Thi Nghe canal in HCMC’s District 3.

At the event, monks both prayed and held small lotus lights in their hands to go along the canal under the bright sky of fireworks display. Prior to the release of flower lanterns, monks also carried out a rite to offer aloe wood to pay tribute to the Buddha with the participation of 500 Buddhists of the Institute of the Buddha of Mercy. This was the third time, the institute had held the annual ceremony to mark the Vesak on Nhieu Loc canal.

The Kim Dong Publishing House has republished a collection of 11 books for children written by late author Doan Gioi, one of the country's most talented contemporary writers.

The collection includes Dat Rung Phuong Nam (The Southern Woodland), a novel which highlights the culture and lifestyle of southern people.

The book has been translated and published in Russia, Cuba, China and Germany. It was also made into an 11-part TV series produced by the HCM City Television in 1997.

Born in 1925 in Tien Giang Province, Gioi worked for several radios, newspapers and publishers. He wrote many short stories, novels and poems.

For his contributions, the HCM City People's Committee decided to name a street in Tan Phu District after his name after his death in 1989.

The performances combine traditional genres of circus and puppetry as well as modern music and dance.

"We have invested in theatre costumes and sound and light effects to dazzle young audiences," said the troupe's director Tran Loc.

Loc said the managing board had worked with local and foreign tourist agencies to introduce their art to visitors. They have also co-operated with many schools to offer free shows for students.

The troupe offers four shows every Saturday and Sunday.

The Viet Nam Association of Photographic Artists (VAPA) will launch a photo contest in Da Nang for people in the central and Central Highlands regions from July 30 to August 28.

The association, in collaboration with Da Nang's Literature and Arts Union and the Da Nang department of culture, sport and tourism, said the contest will kick off on July 30 for candidates in 10 cities and provinces.

Each contestant should send eight colour or black-and-white photos under each of two themes: Land and People in the Central and Central Highlands Regions and The Homeland's Rivers.

The organising committee will select and display photos from August 3 to 8, and announce the winners on August 7.

According to VAPA, another photo contest will be held for photography artists in the central city from August 26 to 28.

Break dancers, graffiti artists and rappers are invited to join the event.

The performance will start at 8pm. The venue is at 188/1 Nguyen Van Huong Street in District 2. Admission is free.

The exhibition features Tuan Anh's latest surreal paintings, which were created in 2015, two years after his settlement in Solingen, a small city in Germany.

In his previous work, the countryside dominated his perceptions and approach to art. Having to relocate to Germany in 2013 meant the artist had been uprooted from his source of inspiration, leaving him in an in-between state. He's neither here nor there. And this uncertainty is reflected in his show.

The exhibition is open until June 20 at 14 Phan Huy Ich Street.

French movies to be shown in TPD, L'Espace

The Centre for Assistance and Development of Movie Talents (TPD) will screen the French movie Amelie tomorrow.

The 2001 romantic comedy Amelie (Le Fabuleux Destin d'Amelie Poulain) is a whimsical depiction of contemporary Parisian life set in Montmatre. It tells the story of a shy waitress, played by Audrey Tautou, who decides to change the lives of those around her for the better, while struggling with her own isolation.

On the same day, L'Espace will present the movie 8 Times up (8 Fois Debout) at 8pm.

TeleCineObs, a publication that critiques movies, said about 8 Times up: "The romantic and melancholy film from young writer Xabi Molia does not hesitate to tackle the most implacable standards of our world."

The movie will be presented in its original French with Vietnamese subtitles. Tickets cost VND50,000. For members of L'Espace and students they're VND40,000.

Music nights at The Observatory to start

The Observatory will organise music nights featuring international and local musicians from May 28-31.

The May 28 show, Optimist Club 130, will present disco-techno mixture by DJs Hibiya Line and Dan Lo.

Next day's performance will highlight DJ VISA from Hong Kong, who will play disco and house, with support from. DJ Hibiya Line.

All music nights start at 10pm at 5 Nguyen Tat Thanh Street in District 4.

Admission is free for the first and final shows. Entrance is VND100,000 after midnight for the other two shows.

The role of the Persian literature in expanding the cultural and diplomatic ties between Iran and Vietnam was discussed at a seminar held in Hanoi on May 27 by the Vietnam Academy of Social Sciences (VASS) and the Iranian Embassy in Vietnam.

Iranian Ambassador Alvandi Behineh said that Iran and Vietnam set up their diplomatic ties in 1973, but their potential for cooperation has yet to be tapped fully.

Mutual understanding of each other’s language and literature is useful to develop cooperation in culture and boost the exchange between intellectuals and peoples, he added.

According to VASS Vice President Pham Van Duc, the bilateral cultural and literature ties have recorded positive developments. Previously Persian literature was translated into Vietnamese through a third language, but the country now has some translators who work directly in Persian.

Sinh Vien Vietnam magazine and a delegation of the European Union in Vietnam on May 26 hosted the closing ceremony and awarded prizes to the winners of a writing competition in Hanoi.

With a good composition and a short film about the EU produced by herself, Le Chau Bao Ngoc, a third-year student at HCM City University of Cinematography and Theatre won the first prize.

The writing competition entitled – What impresses you most about the EU, write it down and win a ticket to Brussels – was launched during January 2015. It was open to Vietnamese young people, under 35, across the country.

The request was made by Politburo member, Secretary of the Communist Party of Vietnam Central Committee (CPVCC) and Head of the CPVCC Commission for Communication and Education, Dinh The Huynh, at the closing ceremony of the VFAA’ seventh National Congress (2015 – 2020) in Hanoi on May 27.

The two-day congress was attended by 273 delegates representing more than 1,100 members of 78 branches of the VFAA around the country.

During the 2010 – 2015 period, the VFAA completed and published 1,723 research works under the project ‘Announcing and Popularising cultural and folk arts property of Vietnamese ethnic groups’.

The association has also invested in numerous projects on sea and island folklore, contributing to affirming Vietnam’s sovereignty over seas and islands.

Over the past years, 282 artisans across the country have been honoured for their great contributions to the development of the Vietnamese folklore.

Addressing the congress, Politburo member Huynh urged the VFAA to fully take in the Party’s Resolutions on culture, literature and arts as well as raise its members’ awareness of effectively implementing the association’s resolutions.

VFAA should promote the implementation of the project ‘Announcing and Popularising cultural and folk arts property of Vietnamese ethnic groups’ to contribute to preserving and introducing folk culture and arts to international friends.

Delegates at the congress elected a new executive committee for the association in the 2015 – 2020 tenure and Professor, Doctor of Science To Ngoc Thanh was re-elected as the VFAA President.