The central province will be the host of the Hue International Cuisine Festival, slated to be held between April 15-19 as part of the 2014 Hue Festival.

The festival will introduce culinary specialties from the ASEAN and Asian countries and 10 Vietnamese dishes that were recognised by the Asian Records Organisation.

A beer festival, sponsored and organised by the Hue Brewery company, will also serve visitors and tourists during the Hue festival, running from April 12-20.

According to organisers, the Hue-based company will pay VND6 billion (US$285,000) towards the beer festival's costs.

The Hue festival has been the biggest cultural event in the central region since 2000.

The northern province of Phu Tho has worked hard to have facilities and activities ready for this year’s festival to commemorate the nation’s legendary founders, the Hung Kings.

The Hung Kings Temple Festival will begin on April 5 (the sixth day of the third lunar month) at the Hung Kings Temple Relic Site with the participation of several provinces nationwide, including Bac Ninh, Quang Binh, Vinh Long and Long An, which represent the three regions of the country.

Some five million visitors are expected to make a pilgrimage to Phu Tho to offer their respect to Lac Long Quan and Au Co - the ancestors of the Vietnamese, and the Hung Kings.

An array of activities will be held during the five-day event, including art performances, photo exhibitions and a contest to make Chung and Giay square and round sticky rice cakes.

Apart from festive activities, traditional rites will be organised to honour the two world cultural heritage - the worship of Hung Kings and Phu Tho Xoan singing.

In addition, special foods from 13 districts and towns throughout the province will be displayed at the festival.

The annual Hung Kings Temple Festival commemorates 18 Hung Kings, the founders of the country and who started a golden age in Vietnamese history. It was recognised as a national event in 2007.

The temple is located on Nghia Linh Mountain, Phong Chau district in Phu Tho province, about 100km northwest of Hanoi. It is a complex of ancient tombs, monuments and temples. 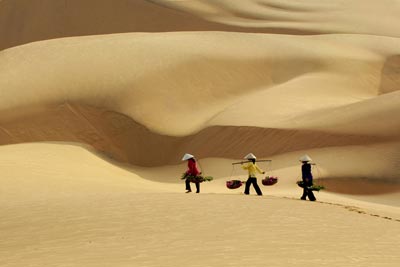 Hung won the prize for his piece titled “On Way to the Market”.

An international award ceremony for the competition will be held in Montevarchi City on March 15.

Hung also won a first-place prize at the International Photographic Competition in Meski, Tukey for his piece “Fishermen”.  The competition attracted photographers from 33 countries around the world.

An international exhibition and award ceremony for the competition will be held at Mersin City on March 22.

The Swedish Embassy held an event in Hanoi on February 27 called Lunch Beat for the first time in Vietnam, in which attendees use their lunch breaks to dance and eat.

The event attracted many participants from the media, office staff and young Hanoians. Vegetarian sandwiches and soft drinks were served along with dance music and a place to move around during the hour-long event.

Many danced with plates of food and drinks in their hands and used the exciting atmosphere to break the ice, strike up conversation and generally have a fun lunch break.

Ms. Bich Van, who works in an office in Hanoi, said despite hearing about Lunch Beat before, this was the first time she came. She said dancing at lunchtime helped her to releive stress and she felt more energized upon returning to work. She hoped that Lunch Beat would become a regular event.

It started off small in May last year with just 14 people in a garage in Stockholm. After she received immediate and positive feedback, she realised it could grow beyond an underground movement.

Canadian singer, composer, vocalist and pianist Mary Ancheta will serenade guests at Boudoir Lounge of the Sofitel Saigon Plaza from now until May 4 from 8 p.m. every day of the week except Monday.

With a philosophy to connect people all over the world through music, Ancheta inspires people with her unique melodies and intuitive mix and match musical compilations. She has entertained audiences internationally in Asia, the Middle East, across North America and Europe.

Growing up in Hamilton, Ontario, Ancheta taught piano at the Ontario Conservatory of Music where she attended McMaster University obtaining her B.A. in Music. She released a solo pop album “Live Life”, as well as an electronic music album with Transient World “All Things Transient”.  Transient World boasts over 50 songs which feature in films and TV. The group was also finalists two years in a row in the John Lennon Songwriting Contest.

Ancheta also scored the film “Everyone” which won the Golden Zenith award at the Montreal Film Festival.

In 2009 she released collaboration “The Near Forever” with co-conspirator and Grammy nominated pianist Geoffrey Keezer.

Past notable performances include opening for John Mayer with Mani Khaira, appearing on CBC for Asian Heritage month, the Grand Opening of the MGM Grand Hotel in Macau and the 2010 Vancouver Winter Olympics.

Set in the late 19th century and early 20th century, the movie features three women belonging to different generations who are faced with harsh tragedies and misery during their lives.

This is Hung’s first French movie. His previous films were Xich lo (Cyclo), Mui du du xanh (The Scent of Green Papaya), Mua he chieu thang dung (The Vertical Ray of the Sun) in Vietnamese; Norwegian Wood in Japanese and I Come with the Rain in English.

The movie will feature Inglourious Basterds star Melanie Laurent, Audrey Tauton from The Da Vince Code and Bérénice Bejo who was nominated for an Oscar in The Artist.

Eternité’s budget is estimated at US$14 million.

The exhibition showcased more than 55 images from 22 photographers selected from a list of hundreds of members of HCMC Photographers Association and Soldier Photography Club. The photos portray lives of soldiers.

“Ho Chi Minh City-Mega City” photo book featuring 1,000 pictures has been released by Michael Waibel, a senior researcher and project leader in urbanism at the Department of Geography of the University of Hamburg, and Henning Hilbert, a scientific coordinator at the Vietnamese-German University in HCMC.

The publication is funded by the German National Ministry of Education and Research’s project, “Research for Sustainable Megacities of Tomorrow”.

HCMC is recognized as Vietnam’s first megacity, according to the book. The metropolis is rapidly changing due to globalization yet has preserved many of its traditional character.

Waibel and Hilbert present to readers challenging questions of the city’s future development during an era of rapid population increase.