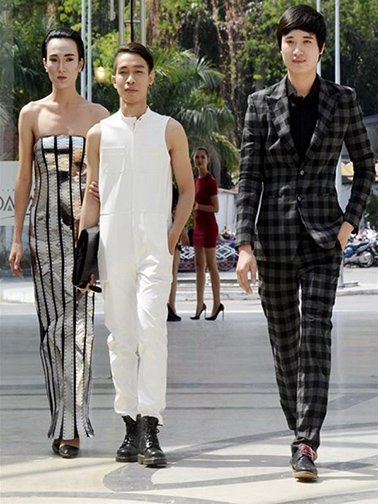 Vietnamese Nguyen Hoang Tu has become one of 12 finalists in the fashion design competition Audi Star Creation 2014 (ASC) in Singapore.

ASC is one of the four main events of the Asia Fashion Exchange festival.

The finalists, who hail from seven Asian countries and are aged between 16 and 25, have been picked following the screening of 418 entries from 14 countries.

They will face off at the Runway Showdown, organized at the Tent@Orchard in Singapore on May 12. They will be required to submit six original and commercially viable designs that reflect this year’s theme “The Asian Perspective”.

All the contestants must have less than two years’ fashion design experience.  Three winners will be named by a panel of judges who are leading experts in the fashion industry.

Prizes include 10,000 Singapore dollars and a one-year internship at high-end fashion retailer FJ Benjamin. On top of that, FJ Benjamin will help the winning competitors to develop and showcase their own collections at Audi Fashion Festival 2015.

The ASC winners will also have an opportunity to show their personal collections at the Blueprint expo, where they can meet international designers and clients. The Audi Young Designer Award, along with 10,000 Singapore dollars, will also be given to the winner whose designs best incorporate the Audi spirit of innovation, technology and steady growth.

This is the second time a Vietnamese designer has entered the ASC final. Vu Ta Linh made it to the top three last year, winning 10,000 Singapore dollars. He will showcase his new collection at the ASC 2014 in May. Linh is doing a one-year internship at FJ Benjamin.

Various forms of kites across the globe will fly in the sky of Vung Tau city, the southern coastal province of Ba Ria-Vung Tau, in a festival from May 8-12.

Announced at a press briefing on April 29, the fifth International Kite Festival is expected to welcome 75 artisans from 29 countries and territories around the world, along with 80 artisans from the host country.

Besides kite performances and competitions, the event will also offer a kite making course taught by experienced artisans.

The Vietnamese Embassy in the UK ceremoniously received 70 documentary films for use in public screenings from the Minister of Information and Communications Nguyen Bac Son on April 29.

Speaking at the ceremony, Minister Son said that Vietnam always considers the Overseas Vietnamese (OV) community an inseparable part of the country and expressed his sincere hope that they and their children will continue to maintain the traditional Vietnamese culture in the UK.

Vietnamese Ambassador to the UK Vu Quang Minh in turn affirmed the embassy will fully utilise the films in a manner that will best facilitate the OV community more fully understand and appreciate not only the traditional Vietnamese culture, but the policies of the Vietnamese Party and State.

He also presented UK large-size color photos on the landscapes of Vietnam taken by himself to Vietnamese embassy representatives, the Vietnamese Association in the UK, and Vietnamese students in the UK.

A number of heritage items have been promoted in recent years, thanks to efforts by individuals and organisations who are devoted to preserving traditional cultural heritage values.

Established two years ago, the Hanoi Heritage Club has evoked the passion and desire of young people to preserve and honour traditional cultural values, contributing to popularising traditional art performances among culture lovers in Hanoi.

Located in a small lane in the capital city, the club is a place where art performances and seminars on cultural heritage are held.

According to painter, head of the club painter, designer Tran Thanh Tung, in modern times many young Vietnamese people are keen on the Republic of Korea movies, European music and the cultures of other countries, but have limited knowledge of Vietnamese culture.

This prompted Tung and his friends from the Circle Group, which includes five investment companies specialising in applied fine arts, to establish the heritage club, said radio The Voice of Vietnam.

It gathers young people who want to contribute to preserving and promoting Vietnamese culture.

“Vietnam possesses a great amount of tangible and intangible heritage. We have a group of researchers, including those who want to understand traditional culture,” Tung said.

“The heritage club was established as a bridge to link the past, present and future. Through the club, we have an opportunity to access our predecessors’ works and promote them among young people."

With the aim of promoting traditional cultural values among the community, the club has received support from well-known experts such as Professor historian Le Van Lan, Associate Professor Dao Dinh Duc, and critic Nguyen Do Bao.

The club’s activities have attracted more and more people, Tung said, adding: “Many foreigners who know about Vietnam through mass media and Internet have shared and provided us with documents and introduced us to new friends. Because of this, we can explore further about our past”.

The Heritage Club has expanded its activities. Major programmes such as the Bat Trang pottery village of the past and present, reading culture and the youth, and Dan Bau or mono-chord performances have shown the club’s great contributions and efforts to promote Vietnamese cultural heritage.

The Dien Bien Phu Victory Museum, one of the many relic sites in northwestern Dien Bien province, keeps many valuable documents and objects related to the historic Dien Bien Phu campaign.

Established in 1984, this history-society museum displays 270 objects and more than 200 paintings and photos of great historical value.

The museum has been receiving many visitors ahead of the 60th anniversary of the Dien Bien Phu victory which falls on May 7. Huge outdoor exhibits such as artillery guns, cannons, tanks, and machine guns impress visitors when they enter the museum.

The reception room features two statues of President Ho Chi Minh and General Vo Nguyen Giap in January 1954, just before the launch of the campaign. The statues plus the narration of the tourist guide bring visitors back to that historic moment 60 years ago. Next to the reception room is an area displaying photos and objects related to the Dien Bien Phu campaign.

The museum has a big sand table detailing the positions of both Vietnamese and French forces during the campaign. There is also a large screen featuring documentaries to help visitors understand more about the events related to the exhibits.

In addition, a corner that showcases the belongings of French soldiers draws attention from visitors.

Didial, a French tourist, said he is emotional to see the simple bicycles loaded with supplies heading to the battlefield and the heavy weaponry used by French forces during the campaign, and admires the bravery and staunchness of the Vietnamese soldiers.

“We’ve learned a lot about the Vietnamese people’s struggle for national independence through the exhibits. We watched a film in praise of the soldiers’ sacrifices. Here we can see with our own eyes what we have read and seen in movies in France 60 years ago. I’m deeply moved,” Didial said.

A mong the visitors are many war veterans.

“I also served in the army so I’m moved to remember the days we fought on the battlefield. Although I was not involved in the Dien Bien Phu campaign, I’m proud of the soldiers who created the resounding Dien Bien Phu victory,” said Tran Thi Xuan, a veteran.

On this occasion, the museum has received hundreds of valuable objects donated by war veterans of the Dien Bien Phu campaign and researchers at home and abroad.

HCMC-based Mekong Expeditions has kicked off a 12-day-11-night Mekong Rally 2014 with 15 drivers from Vietnam, Australia and England taking part.

The 2,400km “From V-day to D-day” rally marks the 60th anniversary of Vietnam’s victory of the Battle of Dien Bien Phu (1954-2014) and the 39th anniversary of Southern Liberation and National Reunification Day (1975-2014), as well as commemorates late General Vo Nguyen Giap.

During the journey, the participants will join in some charity activities to raise funds for Irrawaddy Dolphins in Cambodia, Free the Bears in Laos, and Com co Thit (Rice with Meat), a foundation supporting children in the mountainous region of Vietnam.

According to Dang Bao Hieu, CEO of Focus Investment Group, head of the organizing committee, this is neither a race nor a leisure trip. In the long journey on different terrains, the participating drivers’ endurance will be challenged.

Additionally, through the rally, the organizer wants to help promote tourism in the nation’s northern upland.

“We expect to hold another rally in 2015 and make it an annual event,” Hieu added.

The Mekong Rally will finish in Dien Bien Phu City on May 6.