Like other Vietnamese people, Nguyen Minh, a painter in Bien Hoa city, the southern province of Dong Nai, has expressed his love and respect for General Vo Nguyen Giap in his own way. 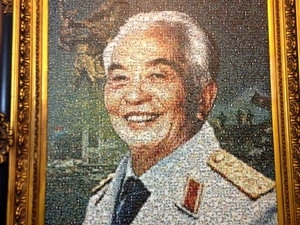 Like other Vietnamese people, Nguyen Minh, a painter in Bien Hoa city, the southern province of Dong Nai, has expressed his love and respect for General Vo Nguyen Giap in his own way.

After spending years collecting 8,800 photos of the revered General, Minh put them together into General Giap’s portrait, measuring 1.2 metres wide and 1.6 metres long.

“I have nurtured the dream of making a large portrait of the General for a long time. The portrait was finally completed after six months, starting from early 2011, right on the occasion of his 100 th birthday,” the painter said.

According to Minh, he wandered through many exhibitions and libraries across the country and spent a lot of time surfing the internet to gather the photos, which are about 1-1.5sq.cm each.

Particularly, the portrait is seen as a book about General Giap’s life, from his childhood to his revolutionary and diplomatic activities, and his old age.

The portrait is now hung near the late General’s altar at his private house at 30 Hoang Dieu Street, Ba Dinh district, Hanoi.

The 120 photos on show depict the revolutionary life of the General while he was working in the northern province of Thai Nguyen during the 1946-1954 resistance war against the French.

They also manifest the deceased’s deep affections and special cares towards the region where he described as his second hometown and people there.

An incense-offering ceremony had been held before the start of the event to commemorate the deceased.

The exhibition will run until October 15.-

The Belgian Royal Museum of Fine Arts has opened its “Vietnamese Culture Space” on October 11, marking the 40th anniversary of diplomatic ties between the two countries.

The exhibition’s two sections display ancient Vietnamese relics and artifacts and introduce Vietnamese culture through multimedia presentations. The photo collection of Clement Huet, a Hanoi resident between 1912 and 1938, is one of its centrepieces.

Deputy Belgian Prime Minister and Minister of Foreign Affairs Didier Reynders said one can trace the development of the Vietnamese nation through the artifacts each period left behind.

He particularly enjoyed the parts of the exhibition devoted to Vietnamese cuisine.

The cultural space is open until May 2014.

“My Life, My Dream” exhibition opens

Plan International and the Centre for Studies and Applied Sciences in Gender, Family, Women, and Adolescents (CSAGA) opened their “My Life, My Dream” photo exhibition in Hanoi on October 11.

The event is a response to International Children Day and the “Because I am a Girl” campaign.

The exhibition’s 45 photos offer glimpses into the lives, the suffering, and the bravery of human trafficking and domestic abuse victims.

“We have developed initiatives creating opportunities for women to improve their quality of life and involve themselves in all levels of society”, said Ms Anh.

Plan Vietnam Country Director Glenn Gibney said the five-year “Because I am a Girl” campaign will support some of society’s most vulnerable members, including young girls, members of ethnic minority groups, and disadvantaged urban residents. The campaign was launched one year earlier on October 11. Plan Vietnam is currently focused on ensuring young urban female citizens can rely on safe and convenient access to public spaces and services.

Plan Vietnam says “Because I am a Girl” has helped nearly 13,000 young girls during its first year, in areas including Hanoi, Ha Giang, Quang Binh, and Quang Tri and it aims to assist at least 100,000 young girls by 2015.

The Southeast Asian Youth Chamber Orchestra (SEAYCO) will perform an October 14 concert at the Vietnam National Academy of Music.

The programme, highlighting German violinist Tobias Feldmann and under the baton of Nicolás Pasquet, includes pieces from Mozart, Mendelssohn, and Schubert.

SEAYCO was founded in 2012 to support emerging musical talent. It is part of the Goethe Institute’s Southeast Asian projects, and has received support from Germany’s Merck Company.

They meet for rehearsals at Thailand’s Mahidol University in Salaya once or twice a year.

Auction for charity in US

The Embassy of Vietnam and some units in Washington DC have organized a “Vietnam charity and culture night” to raise funds for Vietnamese orphans and poor children.

All these art works were auctioned off to raise money for the building of a “Spring” centre for orphans and poor children in the central province of Nghe An.

Embassy staff donated a day’s salary to help storm and flood victims in the central region.

The Hue Monuments Conservation Centre has installed an automatic lighting system on one of the gates of the royal palace in a bid to make the site look more attractive to tourists in the evenings.

The light system at the eastern Hien Nhon Gate, which became operational yesterday, is controlled by LED sensors.

The light display temporarily put in place for the ao dai fashion show during the last Hue Festival inspired the conservation centre to go ahead with the project. The Ha Noi based Phu Thanh Company donated VND1 billion (US$46,000) for the 637W system.

Hien Nhon Gate was designated as the palace's entrance for men.

The southern Ngo Mon Gate served as the main front entrance while northern Hoa Binh was the back gate for logistics. The western Chuong Duc Gate was used for women to enter.

Some experts have suggested the initiative is a waste of money, however, as very few tourists go to see the palace at night.

Martial arts history to be translated

A history book about Viet Nam's martial arts, compiled by martial arts master Pham Dinh Phong, will be translated into English and French.

A photo book entitled ‘President Ho Chi Minh and the Vietnamese Revolutionary Diplomacy’ has been recently published in Hanoi by the Culture and Information Publishing House.

The over 300-page book, which was made by researcher,criticiser and photographer Tran Manh Thuong, contains nearly 700 photos of President Ho Chi Minh’s letters sent to heads of state of other countries and of documents related to the most important historical diplomatic events of Vietnam.

The book provides readers with an understanding of the President’s wisdom and strategic vision on the difficult and sensitive diplomatic front.