As unreliable as Vietnamese statistics

VietNamNet Bridge – Vietnamese economists read a lot of statistical reports every day. But that doesn’t mean they trust them.

VietNamNet Bridge – Vietnamese economists read a lot of statistical reports every day. But that doesn’t mean they trust them. 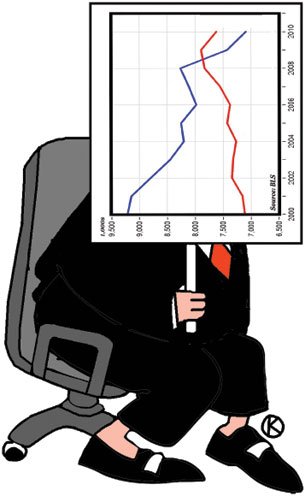 Why is that? Well, take the case of the government statistics officers who recently showed up at business establishments to survey market prices for the first quarter of the year. When shop owners were given the forms, they were told not just to note the figures for the current quarter, but to do so for future quarters as well.

“This is the way a lot of Vietnamese statistical officers operate. How can this produce reliable outcomes?” vents one frustrated economist.

Many economists were astonished to hear that the country’s GDP soared by VND300 trillion [last year]. The reason, they determined, was that the General Statistics Office (GSO) calculated the GDP in accordance with current prices, without explanation. Given this fact, researchers have to re-calculate the statistics themselves if they want to compare GDP figures over the last 20 years. This seems to be an “important mission”.

According to Dinh Tuan Minh from the Ministry of Science and Technology, the most reliable and official data sources in Vietnam that everyone refers to are those of the GSO and state agencies. However, these numbers remain problematic: a lot of statistics have not been released or are not frequently updated fairly to everyone.

Most notably, the quality of statistics remains unreliable. Minh noted that economists dare not use the figures relating to the labor workforce, such as the unemployment rate, because the statistics are unconvincing. They also note that big differences always exist between GDP statistics in local authorities’ reports and those of central agencies’ reports.

To further confuse matters, the State Bank of Vietnam seems to have a perpetual problem deciding when to release its “periodic” reports. Sometimes it releases reports at the beginning of the month, other times at the end of the month.

As if that’s not bad enough, the State Bank can’t seem to even maintain consistency with its own statistical issuances. Reports released by officials at conferences have been demonstrably different from ones posted on the official websites. And no one from the bank has come forward to explain the discrepancies.

How do researchers, the business community, and institutions use the unreliable statistics?

“They just use the statistics to illustrate their particular viewpoints, because they have no other choice. But in fact, the specialists in these fields well understand that the figures have little significance,” Minh explained.

However, economists cannot allow their research to be completely thwarted by the low quality of official statistics. Instead, they adapt and innovate. They have learned to collect information from different sources, and understand how to analyze and calculate figures themselves to glean whatever reliable data are contained therein.

Says Minh, “In general, we usually quote the figures provided by international organizations, together with the official statistics”.