The closing ceremony and handover of the ASEAN Chairmanship to Brunei will be held later the same day, followed by an international press conference. 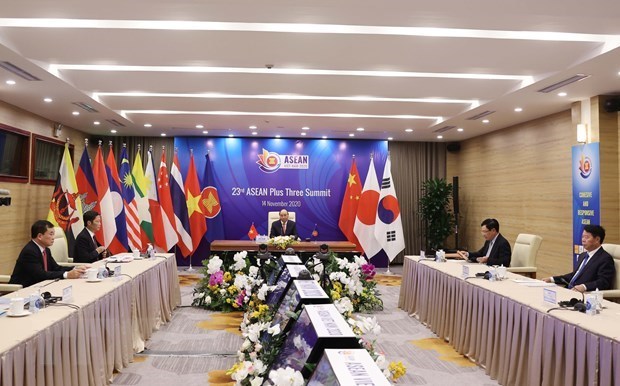 At an event of the 37th ASEAN Summit and related meetings (Illustrative photo: VNA)

During the 10th ASEAN-UN Summit held in Thailand last year, leaders spoke highly of the importance of the UN and ASEAN in jointly addressing challenges across the globe.

They also agreed to bolster ASEAN’s cooperation with the UN Educational, Scientific and Cultural Organisation (UNESCO) and the UN Children's Fund (UNICEF).

UN Secretary-General Antonio Guterres laid stress on the significance and central role of ASEAN in the regional structure, highly valuing socio-economic development achievements of the organisation.

He noted that various challenges remain to be overcome, in order not to leave anyone behind. He affirmed that the UN stands ready to support ASEAN and voiced his hope that the bloc will continue carrying out sustainable development goals.

RCEP was initiated in November 2012 at the 21st ASEAN Summit held in Cambodia, aiming to establish an economic platform between the 10 ASEAN member states and Australia, China, Japan, New Zealand and the Republic of Korea, focusing on trade in goods, services and investment.

If signed, RCEP would become the largest free trade agreement in the world, covering about 30 percent of the world’s population while contributing nearly one third (29.3 percent) of the world’s gross domestic product.

The 37th ASEAN Summit and Related Summits, chaired by Vietnamese Prime Minister Nguyen Xuan Phuc, are running virtually from November 12 to 15. It offers opportunities for ASEAN member nations to comprehensively evaluate the results of intra-bloc cooperation as well as cooperation between the group and its partners, towards setting priorities for the next stage.