Authorities seek to control broadcast of 18+ sitcom on YouTube

VietNamNet Bridge – The Cinematography Department on Wednesday spoke to the media on Wednesday about the premiere of the 18+ (years old) sitcom “Apartment 69” on YouTube.

VietNamNet Bridge – The Cinematography Department on Wednesday spoke to the media on Wednesday about the premiere of the 18+ (years old) sitcom “Apartment 69” on YouTube. 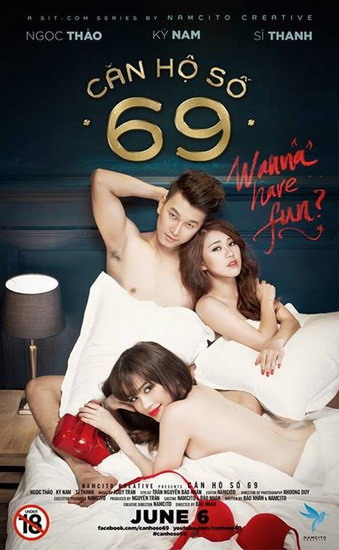 Shortly after the premiere of the first episode, with obscene scenes, of the sitcom on Youtube, which has stirred up the public, the Cinematography Department on May 21 asked the Ministry of Information and Communications and the Ministry of Culture, Sports and Tourism to consider this film’s violations of the rules on movie production and distribution process.

Answering the question “whether Youtube is related to the violation?”, the official said that POPS Worldwide - the only business partner of Youtube in Vietnam - confirmed that the account "Apartment 69 Official Channel" is not their partner, just a normal account, so the copyright of the published products in this address is not protected and the user will determine the existence of “Apartment 69” in accordance with with the "community principle "of Youtube.

However, it is controversial to call “Apartments 69” a "movie", a "product" or a "video clip" because every day there are thousands of videos posted on YouTube. The sitcom producer Nam Cito once said: "My crew is merely people who are passionate about making movies and want share with everyone an entertainment product for non-profit purposes." However, the film was heavily promoted in the media, with the sensitive images of the actors.

According to Duy Anh, the authorities are investigating the movie and the final conclusion on this case is not yet available.

Netizens have been talking about the film "Apartment 69," which is rated by its own producer as 18 +. The first 20-minute episode was released on YouTube on June 5.

On the official channel of this 25-episode sitcom, the producer stated that this is a series for viewers over 18 years of age with content about love, sex and friendship of adults. "Apartment 69" is the first film from Vietnam aired on YouTube, with one episode a month.

The appearance of "Apartment 69" represents a new form of release, which poses risks for viewers, particularly teenagers, since the movie does not face any censorship.

In the first episode, there are a lot of vulgar scenes: a girl takes off her bra after saying: “How can I develop in such hot weather”; a boy masturbates on the sofa in his living room and out at a bus stop; a girl eats a banana in a crude way.