While automobile manufacturers in the world have laid off workers in large quantities to reduce operation costs during the Covid-19 crisis, automobile joint ventures in Vietnam have retained their workforce.

Contrary to all predictions, automobile assemblers in Vietnam decided to retain all the workers they have. 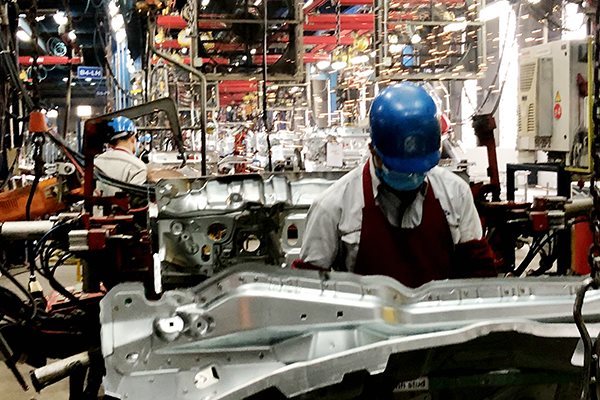 After a couple of weeks of suspending operation during social distancing, automobile manufacturers have resumed their normal operation.

The representatives of Toyota Vietnam, Ford Vietnam and TC Motors said there has been nearly no change in personnel, though sales have become weak because of Covid-19.

Toyota Vietnam reported that only 5,142 products were sold in March, a decrease of 44 percent compared with the same period last year. In April, it sold 2,803 products, not including Lexus, a fall of 33 percent.

The Japanese invested automobile manufacturer affirmed that it always tries to maintain production and business activities to create long-term jobs for locals.

Ford Vietnam reported that all workers have returned to the assembling factory in Hai Duong after the social distancing time in April. The board of management promises not to lay off workers.

Like other manufacturers, Ford Vietnam has seen sales drop dramatically. Only 1,356 products were sold in March and 702 in April, a fall of 68 percent in comparison with 2019.

Ford Vietnam is moving ahead with its plan to expand the factory in Hai Duong. Earlier this year, Ford announced additional investment capital of $82 million to increase the capacity from 14,000 products to 40,000 products.

The automobile manufacturing segment of Thaco in Chu Lai Economic Zone with 9,000 workers have also fully returned to normal production.

Thaco’s communications manager Nguyen Mot said in a plan to develop into multi-field industry group, Thaco has not only retained all the workers in the automotive engineering division, but also planned to recruit more workers for agriculture and forestry production, and logistics.

The domestic automobile market in recent months witnessed a continued slide as all automobile manufacturers and agents reported sharp falls in sales. Nine car models had sales of less than 10 products for each model.

Explaining why automobile manufacturers still retain their workers despite the slow sales, an analyst said that the manufacturers can see the bright prospects of the Vietnamese market.

The percentage of people owning cars in Vietnam is still quite low, while the economy is developing fast, the foreign investment inflows are rising and people's incomes are also gradually increasing.

The other reason, according to analysts, for automobile manufacturers to preserve their workforce is Vietnam’s initial success in containing the epidemic which allows them to return to normal operation just after a short time of social distancing.