VietNamNet Bridge – The Minister of Agriculture and Rural Development yesterday, April 2, ordered a stricter ban on the transport and trade of poultry through border gates.

VietNamNet Bridge – The Minister of Agriculture and Rural Development yesterday, April 2, ordered a stricter ban on the transport and trade of poultry through border gates. 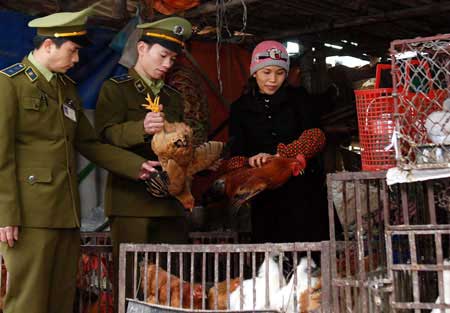 Market Watch officers in Lang Son Province inspect a poultry stall in Gieng Vuong Market. Stricter enforcement of a ban on the trade and transport of poultry through border gates has been issued to prevent H7N9 avian flu strain spreading to Viet Nam.

The ban aims to prevent the H7N9 bird flu strain – which has claimed two lives in China – from spreading into Viet Nam.

Minister Cao Duc Phat told participants in a meeting in the capital that his call for enhanced inspections had been sent to localities and authorised bodies, along with a ban forbidding poultry to pass through the gates in the form of a present from any individual or organisation.

The minister also asked local leaders to work with teams of border soldiers, navy forces, police, market watch officers and animal health officers to monitor villages and key points where poultry are gathered for trade in order to detect smugglers as quickly as possible.

Communication activities will also be enhanced to spread knowledge about H7N9, the lesser-known type of avian flu, which can kill both humans and poultry.

Poultry farmers are encouraged to buy breeds from domestic and trustworthy sources and consumers should use quarantined products.

According to China's National Health and Family Planning Commission, a 87-year-old man and a 27-year-old man died in Shanghai earlier last month, while a 35-year-old woman from nearby Anhui Province was in critical condition after contracting the virus.

Experts were still unclear how the three were infected.

At the meeting in Ha Noi yesterday, participants also heard that the H5N1 strain had been brought under control after several provinces reported outbreaks recently.

Hand-foot-mouth and blue-eared disease (which affects pigs) are still affecting some northern and central provinces and may spread to other key pig-raising areas, the Government warned.

The ministry received permission from the Government to buy 40 million doses of bird flu vaccines to be used if an outbreak occurs.