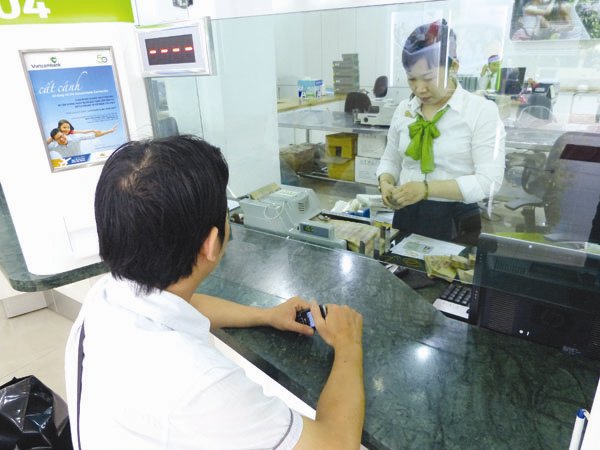 The growth in originally state-owned banks’ total assets is attributed to the presence of additional members of this group of banks.

This group now not only comprises banks established as state-owned banks which have been equitized, namely BIDV, Vietcombank and Vietinbank, but also three new members which the State Bank has bought for zero dong, namely Ocean Bank, GP Bank and VNCB.

The banks also have been able to attract higher deposits, according to a banker.

After bad news was published about joint-stock banks’ performance (some banks have been nationalized, and Dong A has been put under special control by the State Bank), people now are depositing money at state-owned banks because they believe this is safer.

The banker said that people’s confidence had allowed state-owned banks to mobilize capital from the public at a cost of one percent lower.

The banker said that state-owned banks also have more privileges than joint stock banks because they play important roles in the government’s credit programs.

The banks have been entrusted by the government to develop into large commercial banks in the region.

Meanwhile, though joint-stock banks had to increase their chartered capital in the first six months of the year as part of the restructuring process, they only saw their capital inch up by 2.4 percent.

The ROE (return on equity) index grew very slightly by the end of the first quarter by 1.84 percent, compared with the end of 2014.

The growth rates were 2.48 percent for state-owned banks and 1.49 percent for joint stock banks.

The profits made by joint stock banks have dropped sharply because of the provisions they had to make against risks.

Meanwhile, the margin between lending and deposit interest rates has narrowed because joint stock banks have had to pay more for deposits to compete with state-owned banks.

The ROA (return on asset) index of the entire banking system stands at 0.17, a sharp increase from the 0.57 percent level in late 2014.

The report also pointed out that the CAR (capital adequacy ratio) has decreased from 13.45 percent by the end of May to 13.28 percent by June 30, which shows the weak health of the banking system.